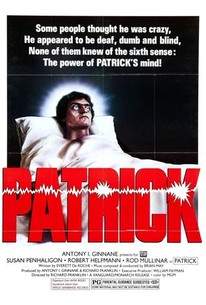 Though he has been in an irreversible coma (a "persistent vegetative state") for several years, Patrick is aware of his surroundings. He also has telekinetic powers which enable him to move objects around by willpower alone. This is helpful, because even if he was able to fully awaken, his body could never move again. Nobody shows much interest in having him awaken, since before he was incapacitated, he murdered his mother and sister. When Kathy, the new nurse (Susan Penhaligon) takes over his care and gives him more than perfunctory attention, he begins to fall in love with her. She becomes aware of this when she begins finding strange love notes in her typewriter. Patrick's body is deteriorating, and his doctors would like to pull the plug on him. Instead, he causes their deaths. Now increasingly aware of his terminal condition, he seeks to induce his nurse to join him in death.

Paul Young
as The Lover

Director Richard Franklin [...] eventually lets Patrick's powers go haywire, but the first half of the film combines sinister atmosphere-building with a justified faith that an immobile killer is still an ever-present threat.

The inert (and uncredited) lead, with help from Richard Franklin's shrewd direction, creates an incredible menace while the thesps surrounding him go through their action.

There are a few interesting ideas, and at least one good shock, but they're buried by some dreadful script and production errors.

With the exception of Miss Penhaligon and Miss Blake, the other actors in the movie, including Robert Thompson, who plays Patrick, seem ill-atease, badly directed or just rotten.

The end result is a dull product that has no identity and whose only real appeal is its special effects. [Full Review in Spanish]

One of Australia's commercially successful genre films of the 70s, a supernatural thriller

Tepid little chiller -- like a horror version of Tommy.

It is a film that resists visceral shocks, favoring the horror of its psychology. A shame, for its psychology is only slightly horrific.

The later 70's saw a handful of films about people with psychic powers, but this little-known thriller from Australia may just be the most unique of them all. Nurse comes under the spell of her seemingly comatose patient, whose intense psychic powers are menacing the people around her. Patrick is a bizarre, yet oddly moving film that benefits strongly from its off-beat and ultimately unpredictable story. It's a tale that manages to side-step clichés to become not only a brooding chiller, but a weird love story as well. There's an occasional good bit of suspense and shock that keeps the tension high. The story also possesses a strange sense of the erotic. Granted, the plot is a bit slow in pace but Richard Franklin's direction and a good cast help to carry it well. Star Susan Penhaligon does a throughly good performance as the films heroine/victim. Rod Mulliner is good as Penhaligon's troubled husband, as is Bruce Barry as her boyfriend. Robert Thompson is also a stand-out as the films menacing title character. Even though Thompson spends most of the film lying in silence he still conveys a threatening presence, he's just that good of an actor. For those seeking a left-field thriller that's thoughtfully well done, Patrick may just be your date

Australian Sci Fi horror film that has hints of previous genre films is an obscured gem that has an interesting premise despite formulaic ideas. Patrick is a tense, thrilling film that relies on effective visuals to build up the tension on-screen. Director Richard Franklin direction is immaculate and precise, and he understands how to build up the tension to make the viewer feel uneasy. Acting wise, the cast give some pretty good performances and bring something special to the screen. There are some truly intense scenes that are quite chilling, and this is one of the most surprising obscured gems in the genre. Horror fans owe it to themselves to see Patrick as it is a well crafted film that has enough chills to keep you interested from start to finish. The idea is quite intriguing and director Richard Franklin brings a certain Hitchcock feel to the movie that makes it quite unnerving. The actors are quite good in their parts and a performance of note is that of Robert Thompson as the title character. He speaks a word, and only acts using facial expressions. I enjoyed the film very much and I recommend this one to any horror fan that enjoyed such films as Carrie. This picture uses telekinesis as a plot device and it works well despite the fact that it is something that we've seen before. Patrick is an obscured gem of a film that deserves to be rediscovered by genre fans. With a good cast, an interesting story and effective chilling moments, Patrick is one of the best films in the Aussie genre of films. If you're in the right mood, you're sure to like this one. This is one of the few films that have something for every horror fan. Even with borrowed elements of other movies, director Richard Franklin creates something unique with this film, and in the process makes one of the most memorable of all Aussie horror films. The film has its flaws, but is thrilling from beginning to end.

Carrie-esque Aussie-horror about a comatose hospital patient named Patrick who has lost as his senses but to compensate he has developed dangerous psychokinesis powers which he uses to win the affections of his newly oppointed nurse. I enjoyed this one, quite good fun. Very low body count so it's quite tame, but it's effectively made and an entertaining little ride. The last 30 minutes are the best. Worth a look.

I thought this creepy telekinesis movie was awesome, but I don't know anyone else who agrees. The story is really unique and the actors are good, and there's some good scary moments. I don't know about you, but I enjoyed it.