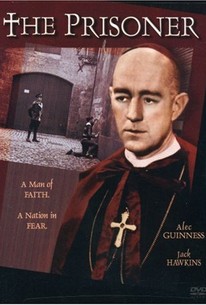 British theatrical director Peter Glenville made his film directorial debut with 1955's The Prisoner (Glenville had previous helmed the London stage production of this Bridget Boland play). The film is based on the real-life travails of Hungarian Cardinal Mindszenty, who after suffering under Nazi persecution was imprisoned by the new Communist regime for remaining loyal to his religious convictions. Alec Guinness, his head shaved, plays an unnamed Cardinal in an unspecified Eastern European country who is clapped into jail. Here he is ordered by the politicos to issue a phony statement to his flock, one that will effectively end Catholicism in his country. Jack Hawkins plays the diabolically clever "Interrogator", who is almost successful in convincing Guinness that his false statement will have a beneficial effect. The Prisoner fared better in its American release than it did in Europe, where it was branded both "pro-Communist" and "anti-Communist" by various single-issue pressure groups. ~ Hal Erickson, Rovi

Alec Guinness
as The Cardinal

Jack Hawkins
as The Interrogator

Jeannette Sterke
as The Girl

Kenneth Griffith
as The Secretary

Ronald Lewis
as The Warder

Raymond Huntley
as The General

Mark Dignam
as The Governor

Gerard Heinz
as The Doctor

Critic Reviews for The Prisoner

The plot is oddly bland.

Customers who insist that Guinness always be funny may be temporarily taken aback to discover him in an intellectual tragedy, but the net result is a movie of uncommon distinction.

The Prisoner is an adaptation by Bridget Boland of her play in which Alec Guinness was carried in the arms of the tragic Muse to the very heights of his profession.

What Guinness does with his eyes alone ... provides a seminar on acting. And that's just from the neck up.

This could've been a fascinating look at the interplay between two very different men...but Bridget Boland's screenplay utilizes the most stilted dialogue imaginable.

There are no featured reviews for The Prisoner at this time.