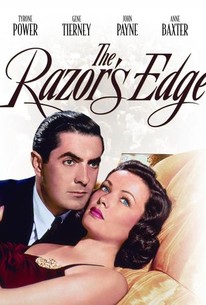 After several years' service with the Marines in World War II, Tyrone Power made his much anticipated return to the screen in The Razor's Edge. Power is appropriately cast as disillusioned World War I vet Larry Darrell, who returns from hostilities questioning his old values. To find himself, Larry joins several other members of the Lost Generation in Paris. He is disillusioned once more when the society deb whom he loves, Isabel Bradley (Gene Tierney), marries another for wealth and position. She returns to Larry's life to break up his romance with unstable, alcoholic Sophie MacDonald (Anne Baxter in a powerhouse Oscar-winning performance). After Sophie's death, Larry determines that the life offered him by Isabel is not to his liking, and continues seeking his true place in the scheme of things. Acting as a respite between the plot's various intrigues is Clifton Webb as a waspish social arbiter, who ends up a lonely, dying man, imperiously dictating arrangements for his own funeral. The Razor's Edge was based on the novel by W. Somerset Maugham, who appears onscreen in the form of Herbert Marshall. The film would be remade in 1984, with Bill Murray in the Tyrone Power role. This film re-teamed Tierney and Webb two years after their appearance together in Laura.

Barry Norton
as Escort of Princess

Stanislas Bielski
as Man at Bar

Lillian Stanford
as Customer in Sulka's

Louis Bacigalupi
as Miner
View All

Critic Reviews for The Razor's Edge

Goulding indulges in voluptuously lit scenes dominated by well-dressed extras, lots of carousing and booze, catty dialogue, and water fountains that upstage everybody.

I suppose most of us are seeking some kind of solution for our daily problems and frustrations, but I'm afraid we have neither the financial means nor the spiritual tenacity to go mountain-sitting in India.

It certainly follows the W. Somerset Maugham novel -- being just as verbose, obscure in its philosophy and jumbled in its construction.

The start is promising and I'm immediately infected by the bombast I observe in the mise-en-scène, although in the second half I get bored when perceiving a narrative repetition planned by a superfluous indulgence. [Full review in Spanish]

Edmund Goulding's version deserves crdit for trying to adapt Maugham's difficult existential movel, but Tyrone Power is miscast and the film is too melodramatic and verbose, failing to illustrate the novel's essence.

Often pushing against Production Code limits, it is a fine execution of the novel

Audience Reviews for The Razor's Edge

An okay adaptation of Maugham. It isn't a great "returning home" film but Maugham's book does present some real challenges in terms of adaptation. A modern director likely would have been able to do the trick.

This movie sounds very promising, but it wasn't as good as I expected. The story is very normal, very long, and gets boring eventually. It isn't a bad movie, it just isn't the emotional, dramatic, yet entertaining film it could have been.

A little long but not bad. A great story too.