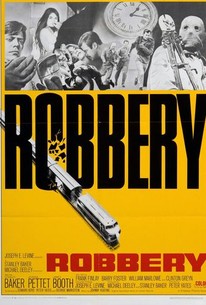 Based on the true story of the 1963 British Royal Mail robbery, this late '60s British caper film was directed by Peter Yates a year before he made the action classic Bullitt in the States. Opening with an extended jewel theft sequence followed by a action-packed car chase, Robbery details the events before, during, and immediately following the infamous heist. Paul Clifton (Stanley Baker, who also produced) is the main thief who comes up with the idea to steal three million dollars from the overnight mail train that runs from Glasgow to London. While gathering together a crew of thieves, he helps currency expert Robinson (Frank Finlay) break out of jail. The gang successfully holds up the train, takes the money, and retreats to an empty field to divide it up. When Robinson calls his wife on the phone, Inspector George Langdon (James Booth) from Scotland Yard traces the call and arrests them. As the legend goes, one of them manages to escape with the money. Also starring Joanna Pettet, who played Mata Bond in Casino Royale, and a young Robert Powell, who would go on to appear in the crime caper The Italian Job.

Linda Marlowe
as Debutante at Nightclub

We don't need to be told why a man would rob a bank; we just want to know how he gets away with it, right?

A forensic examination of the making of a crime, Robbery keeps pace with other '60s capers (Topkapi) and overtakes others (The Italian Job).

It's only routine cops and robbers doings.

There are no featured reviews for Robbery at this time.