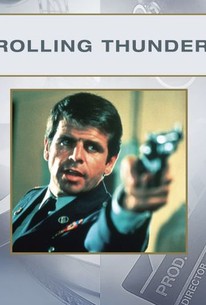 William Devane plays a rare sympathetic role in Rolling Thunder, though his behavior is just as cold-blooded and sharkish as in any of his villainous assignments. Devane is cast as Maj. Charles Rane, a recently released Vietnam POW who is given a hero's welcome in his Texas hometown. Things sour pretty quickly, however: Rane's wife has lost all love for him, his son doesn't recognize him, and there are those in town who consider him a "loser" or "baby-killer." All he really has to show for his ordeal in Nam is a cache of silver coins bestowed on him by the more sympathetic townsfolk. A scumbag gang of thieves decides to relieve Rane of his money; they kill his family, then torture and disfigure Rane to ascertain the whereabouts of the coins. Now living only for vengeance, the taciturn Rane heads to Mexico to exact his own brand of justice on the fleeing crooks. Tommy Lee Jones co-stars as Rane's best friend, Johnny Vohden, who unquestioningly agrees to help Rane in his mission of revenge.

Michael Nakamura
as The Torturer

Paul A. Partain
as Brother-in-law

James Victor
as Lopez
View All

Flynn's crisp, laconic direction and evocative use of Southern Texas locations transorm Rolling Thunder, now at area theaters, into a more distinctive exploitation movie than it deserves to be.

Performances are made crystalline through a sixth sense for camera placement and curt cutting from director John Flynn, whose 2007 passing was little noted, though his no-BS way of laying down a story is a rare commodity in any era.

In sum, it neither rolls nor thunders.

[It] has some good things, but in the way it has been directed by John Flynn it moves so easily and sort of foolishly toward its violent climax that all the tension within Charlie has long since escaped the film.

The film should be viewed by any pondering war and its psychological consequences. And, if not made clear enough already, the acting on offer is simply fantastic.

The connection to an emotional truth is key to its success, because as the plot starts moving and the elements of the violent revenge flick start rearing their head, the movie feels grounded in Rane's reality.

This exploitation flick is a red-blooded, all-American revenge movie, but offers sensitive insight into the pain of post-war adjustment.

While Rolling Thunder suffers from Schrader's predictable obsessions with masculine ritual and gunplay, Devane and Jones enhance the material with their nuanced, sensitive portrayals of men who have lost their souls in another land.

Devane and Jones are outstanding. Their characters are as numb as scar tissue, emasculated by peace and alienated by an ashamed and horrified society. The folly of the Vietnam War permeates every frame.

Revenge films of the 1970's have always were something unique in terms of acting and sheer bad asssed entertainment value. Charles Bronson delivered in Death Wish and that film became one of the standout revenge films of the era. I can think of only one film that comes close to the raw power of Death Wish and that's Rolling Thunder, a powerful action drama starring William Devane and Tommy Lee Jones and brilliantly directed by John Flynn. Films like this show a raw and intense gritty quality that makes for a truly intense viewing experience. With a great cast at hand, Flynn delivers a great movie that is unflinching and highly entertaining from start to finish. John Flynn takes his time to let the story unfold and you steadily get more a more involved as the film progresses to a riveting and thrilling final. This is an effective action picture that stands out due to the great performances and the effective story that is pretty basic, but is constantly exciting due to the fact that it feels like an in your face type of film that just grabs your attention. Quentin Tarantino has said that this was one of his favorite films, and I can understand why. Devane delivers and his character is perplexed with bringing a brand of revenge to the thugs that have murdered his wife and son. If you love old school action flicks that are brilliantly acted and tell a great story with using the basics, then this is the film for you. This is a thrill ride that takes time to unfold, but when it does, it comes with a great payoff. Rolling Thunder is one of the moist memorable revenge films that I have seen. Rolling Thunder is an exciting and bold picture that proves that you can easily create effective action without the big explosions that big studio productions have.

B-movie heaven. An unjustly neglected revenge classic with a simple but compelling plot that sets up William Devane and Tommy Lee Jones in low key, no nonsense performances, leading up to a bloodbath reminiscent of "The wild bunch". As gritty and heartbreaking as almost anything written by Paul Schrader.

This grindhouse classic rises above the level of a normal b-movie revenge flick and earns it's reputation as a low-budget American masterpiece. The scene of the gang stealing the coins from Major Rane is one of the most tense and terrifying scenes I've seen.