The Roman Spring of Mrs. Stone1961 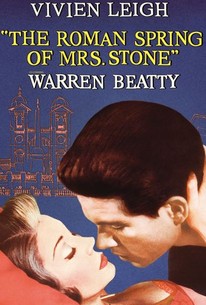 Karen Stone (Vivien Leigh) is a middle aged former actress who moves to Rome after the death of her wealthy husband. The lonely widow is fawned over by a series of men seeking a short cut to the good life. Contessa (Lotte Lenya) is the pandering madame who sets Mrs. Stone up with Paolo (Warren Beatty). Karen falls in love with her handsome young "escort", who breaks her heart when he is given another assignment by Contessa. She is shamed and humiliated by the pretentiously prophetic gigolo, whose prediction comes true when the lonely woman swallows all her pride by again opening her bedroom door to him. Taken from the Tennessee Williams novel, The Roman Spring Of Mrs. Stone, this film marks Vivien Leigh's return after a six year hiatus.

Henry McCarty
as Kennedy
View All

Critic Reviews for The Roman Spring of Mrs. Stone

Not all the women who sleep with men young enough to be their sons die foi their sins, but most of them live to wish they had.

The disappointing pic is right in Vivian Leigh's wheel-house, as she inhabits her aging and fading beauty character to the fullest and gives a superb performance.

As the aging actress, Vivien Leigh is good but Warren Beatty is miscast as the gigolo in this weak screen adaptation of Tennessee William's novella.

The tagline says that they called it love and it was for sale, to which the appropriate response is that one hopes they kept the receipt.

The prose is so purple and the tone so overripe that ... what wants to be mature, sensual romance-novel boilerplate becomes instead a plodding exercise in intriguingly cast camp.

Audience Reviews for The Roman Spring of Mrs. Stone

Very nearly a comedy in the same vein as Reefer Madness, this cautionary tale told to keep older women from even considering younger men is exaggerated to the point of rue. Warren Bratty interestingly plays an Italian so vain I bet he thinks this song is about him. Pass it by unless you could use some sad in your life

A very real side of Roman life is shown in this film ~ love for sale. In the train station or on the beaches of Ostia, the ragazzi barter with male or female for cash. Young men parade themselves in hopes of bedding old, wealthy, foreign woman. Vivien Leigh is haunting in Williams' treatise on withering beauty, aging and diminishing chances for love. While Beatty's looks fit the part of a gigolo, he is unbelievable as an Italian, an unfortunate miscast. Leigh's abandonment brings the film to a chilling conclusion.