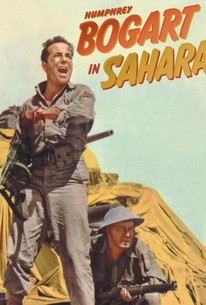 Sahara is a World War II film about a British-American military unit that is stranded in the Sahara desert and not only has to fight for survival against the elements, but has to battle the Nazi troops that are closing in on the squadron. Driven by energetic direction, an exciting story and a terrific performance by Humphrey Bogart as the sergeant who is the leader of the troops, Sahara is one of the best World War II dramas.

Packed with pithy dialog, lusty action and suspense, and logically and well-devised situations avoiding ultra-theatrics throughout.

Watchable more for its strong cast than for its credibility or its pretensions ...

One of the best WWII-era WWII movies… a thoroughly entertaining war actioner starring Humphrey Bogart as a tough American sergeant commanding a tank crew in the Libyan desert.

"Sahara" is a laudable conception of soldier fortitude in this war, and it is also a bang-up action picture, cut out to hold one enthralled.

Like other WWII adventures, Sahara contains elements of propaganda, but it's expertly directed by Korda, well acted by Bogart and the other men, and strikingly photographed by Rudolph Mate who received an Oscar nomination.

Bogey's presence lends a hard-boiled nature to the picture.

Thanks to the strong performance by Bogey, at his heroic best, it's watchable.

kind of forgettable. i can say this cuz i watched it all the way to the last scene before i realized i had seen it before :\

Bogart puts in another great performance in this WWII classic.

Sahara was a seriously overlooked Humphrey Bogart gem that sadly gets none of the credit it deserves. Its not really Bogart's movie, more of a team effort with great camaraderie and chemistry between the characters and cast respectively. Sahara has great photography and avoids the claustrophobic studio sets of the time. The movie does get a little sentimental but what do you want from a war movie that came out during WWII? All of this and watching a Nazi die in a pretty gruesome way gets you yelling at the screen. A must for any Bogart fan.

a unique and inventive war film, a bit slow on the uptake but an ending that sets the stage for many other war films like it. entertaining characters and interesting dialogue make for a highly recommended and excellent film.