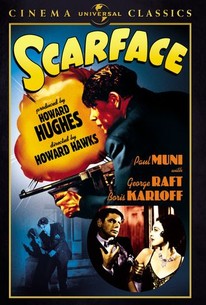 In this film, based on Armitage Trail's novel, Paul Muni stars as prohibition-era mobster Tony Camonte. The homicidal Camonte ruthlessly wrests control of the bootlegging racket from his boss Johnny Lovo. However, Tony does have a soft spot in his heart for his sister Cesca.

John Lee Mahin
as MacArthur of the Tribune

Howard Hawks
as Man in Hospital Bed, Man on Bed

Poll: Who Should Star In The Scarface Remake?
In Other News…Rose McGowan, Al Pacino, Daryl Hannah, and James Doohan

What it has, and what the many other gangster films that have followed it have not, is an ice-cold anger of purpose.

[Scarface is] a brilliant film thanks mainly to the acting of Paul Muni and Ben Hecht's script.

Scarface is one of best of the early gangster movies; its wit and building velocity speeds it past Little Caesar and keeps pace with Public Enemy.

By far the most visually inventive and tonally anarchic movie that Hawks made.

Scarface is a grisly, exciting gangster picture, based in part upon the career of Alphonse ("Scarface," "Snorkey") Capone.

Atmospheric, mesmerising and darkly humourous with a sizzling script and cast. This is a true classic of its genre.

Among other things, Ben Hecht was a Chicago newspaperman, a playwright, author of maybe the funniest American novel...Hecht defines the writer-producer relationship...

Scarface is a gangland epic, a drama In the raw, bold, brutal and terrifyingly realistic. A high-powered dramatic production that packs a lot of excitement and entertainment, full of brutal killings and yet with some glorious emotional thrills.

If you are fond of an evening of bloodshed and some "stout" first-rate acting from an excellent cast, you will find it will provide you with all the cinematic beer and skittles you have been looking for.

Scarface is a good film because there are real people in it and because in the rare lulls between gunfire its touch is delicate and sure.

It is getting very tiresome to see North American film productions insist that the only bad guys exist abroad. Al Capone was born in Brooklyn! [Full Review in Spanish]

One of the defining gangster films, this is a classic of the genre, one of the first films to really establish the gangster film and adding elements of visceral violence, which for its time was ahead of its time. Scarface is a phenomenal film, a film that is well acted, entertaining and well paced and manages to be a highly captivating film that is well worth your time if you enjoy the genre. The performances here are great and each actor brings something that elevates the film significantly. Plenty of gangster films have been released since then, but Scarface has a secured place as one of the finest examples of what a crime film should be. Simple, yet effective in its execution, this is a great film, a masterwork of cinema, one that showcases brilliant acting and storytelling that is never boring, and with that being said, it's quite impressive to see a film like this having been made during this period. The film is action packed with the right blend of drama and thrills to make it a worthwhile and memorable experience for viewers that enjoy a solidly paced gangster film. For its short run time, Scarface does a lot more than most genre films that are nearly three hours in length. This is filmmaking at its very best and it's a movie that is sure to appeal to any film buff that enjoys a well crafted picture. Scarface still holds quit well by today's standards, and it's one of the defining films that has helped shape the gangster genre.

This film remains a triumph for two solid reasons: it was speaking about the life of an American gangster while said gangster was still alive, and it overcame the debilitating reach of the censorship board in Prohibition era America. Made for the sole purpose of exploiting the fame of Al Capone during his years running Chicago, its reputation at the time was that of educational entertainment for people to see the death and destruction of the mobs. The very beginning of the film starts with a disclaimer urging the public to stand against the criminals and take action for themselves. Of course this ploy was only so the film itself could get into theaters, but it does add a bit of melancholy to the ending. Instead of showing these deviants, there is a romanticization of the lead character, Tony Camonte. Though this film's descendent, of the same name, did a better job of showing the glory and unjust winnings of the mob boss, this film did not disappoint in showing the flash and pomp of being the big shot. Besides the scenes of luxurious ballrooms and fine wine being poured, there's also a quality to Tony that makes him an underdog and somewhat of a hero throughout the film. It's obvious from the beginning that Tony has little brains for the operation, but plenty of ambition, and it's that dumb luck and lack of self-awareness that leads him to win out over his employer. His own ineptitude leads him to be portrayed as brave, when really it's a case of someone going too big too soon and losing it all. What also strikes you is how it's not educational in any sense of the word. There's a henchman who is hard of hearing who ends up being the comic relief, which is very much not showing mobsters in a bad light. Besides that there is also a character study between Tony and his sister, whose relationship is oftentimes abusive. There's a bit of melodrama when it comes to their relationship and the way he treats her, but it also lends to an entertaining watch. The two of the them make the movie go out in a blaze of glory at the end and lends, again, to melancholy. The story is certainly entertaining, but how it's framed and having that historical context really makes this a solid and enjoyable watch.

If you're planning on watching this film, I recommend viewing it well before even thinking of setting your eyes on the uncompromising and excessively brilliant Brian DePalma-helmed and Al Pacino-led 1983 version. Pacino's tour de force performance makes Paul Muni's campy efforts seem little more than negligible, and the film's relatively tame screenplay does little in way of shocking the viewer in the same ways that DePalma's gangster epic did scene after scene.

We find ourselves in the 21st century praising the 80's "Scarface" as if it were a masterpiece. Posters, snapshots, quotes, and scenes are plastered everywhere; in someways, the 1983 "Scarface" has become a recognizable film to the average Joe. But with a bloated running time and weak movie-making techniques, it fell far short from being the masterpiece many cult-followers claimed it to be. Where's the love for the original? Riveting, compelling, and pure story-driven galore, the original "Scarface" is worlds better than the remake and is definitely the movie of choice. The original "Scarface" is what the masterpiece is: It's coupled with an even more absorbing narrative with a pacing quick enough to remain fresh even nowadays. Not only this, the original's bolstered with impeccable cinematography and lighting that's absolutely beautiful to marvel over -- perhaps too beautiful for a gangster flick. This was perhaps one of the biggest issues audiences had with "Scarface" -- it glamorized the gangster lifestyle a bit too much. Yes, the action was quick, frantic, and violently and realistically in-your-face (Yes, it remains realistic even today), but it was too morally skewed. It glamorized the villains, not the true-to-life heroes, thus came the "Production Code" -- a censorship placed upon all films to put control over explicit content until the late 60's. Nevertheless, "Scarface"'s narrative is just too mesmerizing with one of the most memorable scenes I've seen in cinema since "No Country for Old Men" (which was years ago for me). "Scarface" will be etched in my mind as a masterpiece, but perhaps its biggest problem was the dialogue. Don't get me wrong -- it gets the job done, but don't expect award-winning, witty dialogue. This is nearly a small gripe in an otherwise exceptional film that nearly stands to the test of time. Stop praising the Al Pacino remake. I agree -- Pacino was flawless in his role, but if I were to pick the better film, I'd pick the 1932 "Scarface". Even if you treat older classics like leprosy, give the original a try -- it's a surprisingly up-to-date, frenetic thriller.