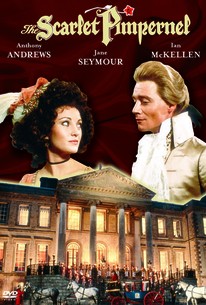 Swordplay, secret messages, and the rustle of ballroom finery make this 1982 adaptation of The Scarlet Pimpernel a gala bash. Anthony Andrews heads the cast as English nobleman Sir Percy Blakeney, a conceited but amusing fop in the drawing rooms of British high society. But beneath his veneer of lacy impertinence is a man of bravado and derring-do. In disguise, he becomes the Pimpernel -- ta-da! -- and steals into France to rescue aristocrats condemned to the guillotine during the French Revolution. After each rescue, he leaves behind a scarlet pimpernel, a flower whose petals close at the approach of stormy weather. He also uses a signet ring engraved with a scarlet pimpernel to identify himself on the sealing wax of letters to compatriots. It is all jolly-good intrigue. Because he cloaks his schemes in great secrecy, not even his new wife Marguerite (Jane Seymour) realizes he is anything more than an innocuous dandy. Frustrated, the French send the ruthless Chauvelin (Ian McKellen) to England to serve as ambassador and ferret out the elusive Pimpernel. In a plot that ensnares Marguerite and closes the Pimpernel's petals, Chauvelin finally confronts his clever adversary, and it's en garde -- parry and thrust!

Julian Fellowes
as The Prince Regent

Richard Charles
as The Dauphin

Critic Reviews for The Scarlet Pimpernel

he whole affair, filled with ample swash and buckle, is a most engaging romp thanks to the dashing Andrews. Of course, he has the kind of role most actors would commit unspeakable acts to win.

Audience Reviews for The Scarlet Pimpernel

When I rented this movie it was under the swashbuckling section, I really had no idea what to expect. What I got was a really entertaining film. This film is a mix between Zorro and The Three Musketeers. The sets and costumes were great. Ian McKellen was so evil. This movie was great entertainment.

A campy adaptation of the classic story of derring do that has some nice period detail, a decent cast and Jane Seymour at her most stunning. Hardly a classic, but reasonably good fun.