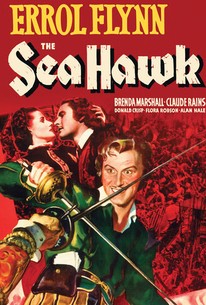 In the 1580s, the Sea Hawks -- the name given to the bold privateers who prowl the oceans taking ships and treasure on behalf the British crown -- are the most dedicated defenders of British interests in the face of the expanding power of Philip of Spain. And Captain Geoffrey Thorpe (Errol Flynn) is the boldest of the Sea Hawks, responsible for capturing and destroying more than 50 Spanish ships and ten Spanish cities. His capture of a Spanish galleon, however, leads to more than he bargained for, in a romance with the ambassador's niece (Brenda Marshall) and the first whiff of a plan to put Spanish spies into the court of Elizabeth I (Flora Robson). Thorpe's boldness leads him to a daring raid on a treasure caravan in Panama which, thanks to treachery within Elizabeth's court, gets him captured and, with his crew, sentenced to the life of a slave aboard a Spanish ship. Meanwhile, Philip of Spain decides to wipe the threat posed by Elizabeth's independence from the sea by conquering the island nation with his armada. Thorpe, though chained to an oar, knows who the traitor at court is and plans to expose him and Philip's plans, but can he and his men break their bonds and get back to England alive in time to thwart the plans for conquest? The Sea Hawk was the last and most mature of Flynn's swashbuckling adventure films, played with brilliant stylistic flourishes by the star at his most charismatic, and most serious and studied when working with Flora Robson, whom he apparently genuinely respected. Boasting the handsomest, most opulent production values of a Warner Bros. period film to date, The Sea Hawk was made possible in part by a huge new floodable soundstage. Another highlight was the best adventure film score ever written by Erich Wolfgang Korngold; and the script's seriousness was nailed down by various not-so-veiled references not to 16th century Spain but 20th century Nazi Germany. The movie was cut by over 20 minutes for a reissue with The Sea Wolf, and the complete version was lost until a preservation-quality source was found at the British Film Institute. Since then, that 128-minute version -- which actually contains a one-minute patriotic speech by Robson as Elizabeth that was originally left out of U.S. prints, as well as amber tinting in all of the Panamanian sequences -- has become standard.

Elizabeth Sifton
as Maid of Honor

Mary Anderson
as Maid of Honor
View All

Critic Reviews for The Sea Hawk

When The Sea Hawk is purely cinematic, it's at the top of its class.

Checks all the boxes for a seafaring adventure epic.

I don't feel so much emotion with this adventure film by Curtiz, in his tenth collaboration with the mythical Errol Flynn, but I can instantly recognize, despite the lack of dynamism, that it has some interesting characters. [Full review in Spanish]

...as much as Flynn himself, what pulls together the grand action set-pieces of swordplay ... and gushing romance is the music by Erich Wolfgang Korngold. It's Hollywood's greatest swashbuckling symphony and one of the all-time favorite movie scores.

...romance, adventure, and intrigue; lavish costumes and sets; heroes and scoundrels aplenty; and Errol Flynn swinging from ship to ship. What more could you ask for?

Curtiz and Flynn at their apex

Audience Reviews for The Sea Hawk

Big time adventure, bigtime fun as we return to Europe in the 1500's. Spain is set to take over the world by dint of her incredible navy ... only Britain stands in her way with a group of seagoing patriots called the Sea Hawks. This rousing Hollywood call-to-arms prepared Yanks for the real war already happening in Europe at the time. The villains are despicable (if well dressed) and numerous, the Queen is brave but broke, and the hero ... the epitome of dashing derring-do.

Errol is dashing as always and Flora Robson is wonderful as Good Queen Bess, but the absence of Olivia de Havilland, substituted with the vapid Brenda Marshall is sorely apparent. Not bad but should have been a little shorter, tighter and it just cries out for color.

the greatest of all swashbuckling adventures! pirates of the carribbean, bite me!

"sea hwak" is the quintessential swashbuckler with golden team of errol flynn and driector michael curtiz as well as flynn typecasted sidekick alan hale despite the abscence of basil rathbone and olivia de havilland who had been weary of the repeated stereotypes then. flynn plays the legendary captain thorpe who serves england by robbing the ships of spain who mistreated british privates by severe slavery at ship-decker. this time flynn's competent villains would be claude rains and henry daniell, and his rosy beauty would be branda marshell who happens to have a likable nanny played una o'connor. heroic patriotism, just brotherhood, gallant chivalry and debonair suaveness are all well-applied in "sea hawk" with the grandly vital music of erich konkorg who also supervised flynn's "robin hood". two knights of good and evil have duelts by swords with their massive shadows magnified on the wall as michael curtiz's signatured expressionistic photography. striking woman plucks thorn roses in the garden, rescued by a gorgeous dashing flynn, then two whispers the ingenundo of love with the talk of monastery statue. manhood is projected in the most idealistic way with its shining glamour, and errol flynn would be its best representative. british stage actress flora robson incarnates as queen elizabeth who has the adequate screen presence, personally fonded by flynn who has good chesmistry with her at the scene together with the courteous monkey. allegedly, flynn prefers performing with her as elizabeth to the abrasive bette davis who also plays elizabeth with flynn in the later "elizabeth and essenx." it is complained by flynn that davis overslaps him in one scene. further, "sea hawk" also has a hinted political stance then by comparing england as the league of decent democracy against the spain which stands for the sinisterly arrogant nazi then, reflecting the world war II condition at the time it's released.