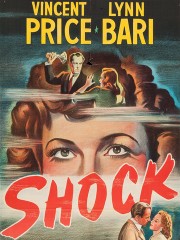 stu b
½ February 22, 2019
A tidy little thriller. Vincent Price stars as a psychiatrist who is called upon to treat the frightened young woman who saw him murder his wife. His choice is clear: do his best to cure her--witnessing the crime has left her in a state of speechless shock, and she has no memory of what the killer looked like (how fortunate for Mr. P.!)--or continue to silence her by plying her with drugs and, if necessary, let her die. Price is very good; Lynn Bari as his cruel, cold-blooded mistress (who is also, conveniently, his chief nurse) is even better. This one's a keeper.

Kenneth L
April 28, 2015
This is an okay little 1940s B-movie; it's notable mainly as an early starring role for the one-of-a-kind Vincent Price. I like watching old B-movies every now and then, if not necessarily for the films themselves then for the way they embody an earlier period of moviegoing, one in which people went to the movies every week and not every film was necessarily expected to be either a huge blockbuster or a groundbreaking artistic statement. This movie has a clever little premise which it plays out in a straightforward manner; it's like a little short story tossed off by a prolific thriller writer.

The story begins with a young woman (Anabel Shaw) accidentally witnessing a murder and falling into a state of catatonic shock. (The film's ideas on psychiatry and gender are, shall we say, dated.) Nobody knows what she saw, however, and she is sent to a mental institution to recover. However, the doctor in charge of the institution (Vincent Price) is the very same man who committed the murder she witnessed!

The film came in a ten-DVD pack of noir films I recently obtained. It's a decent movie, but not really the best example of film noir; and it's not really like the macabre horror movies Price would become known for later on in his career. It's somewhere in between the two, really. As a film noir, it's not especially gritty or trenchant; as a horror film, it's pretty tame. Still, the performances are pretty solid (if melodramatic), the premise is quite good, and hey, it's got Vincent Price. What more do you want from a 70-minute 1940s B-movie?

Devo K
December 23, 2014
Much more effective and interesting if you don't read the synopsis first. A younger looking Vincent Price stars and that's all you need to know. Now go watch it and have fun!

Wes S
½ February 13, 2014
It has an interesting premise but the execution is bland and boring. Price's character is mediocre in this film and the story goes slow and unsuccessfully. Basic drama.

Daniel K
½ April 16, 2013
2.5: I've always thought Vincent Price was an interesting fellow. He can play creepy like nobodies business. This is an interesting story with shades of Spellbound among other thrillers/noirs. Basically it's the kind of solid B movie that was churned out like clockwork back in Hollywood's golden era. The mood and tone, as well as some of the actual plot elements, must have rung very true with many soldiers/sailors/airmen/marines coming home from the war, which is kind of the whole point of noir. So, in that sense it is a rather quintessential noir.

Dr. F P
February 27, 2013
Shock is a nice short thriller that I was really impressed by. I liked how even though Dr. Cross commited the murder I still felt on his side. I had to laugh about how needle happy the sanitarium was too. I didn't go into this expecting much but even from just after the beginning of his career Vincent Price was still kind of endearingly creepy without the mustache.

Super Reviewer
Kevin M. W
½ January 14, 2013
Vinnie kills his nagging wife in a flyaway moment of rage, but is seen by an hapless innocent busy looking for her husband, and so begins this little bit o'sinister as Vinnie wonders about whether he can be a coldblooded killer, whether he is, or maybe he was just trying it out for size, one time, no harm, no foul. Not bad.

Luke W
October 31, 2012
Vincent Price plays a psychiatrist with conflicted loyalties in this relatively short feature. While leading lady Anabel Shaw is far too hammy most of the time, the story is compelling enough to carry her, but the story is pretty slowgoing even for a 40s film, which might test the patience of some viewers.

SHOCK [1946]: one lesser known Vincent Price starring, crime-thriller sees a young fiendish Price playing a murderous Psychiatrist who kills his wife in a hotel room. However a young woman waiting for her husband to return from World War Two in the room across from him witnesses the whole thing and goes into shock. This means The Psychiatrist can now keep the only witness quiet by convincing her that she is insane in his Asylum.

SHOCK is a decent thriller despite an unbelievably clichéd title that is worthy of a repeat viewing. Price gives another great performance in the role of the homicidal doctor. So this forgotten gem is worthy of a 70% rating.

gerardo r
½ August 2, 2012
An okay movie to pass the time. It will only appeal to film noir fans who enjoy getting to know all the films available in the genre. The story line and acting do not provide any special or superior scenes. The title Shock refers to the psychological condition of shock and not that the film will provide a shocking revelation. A woman witnesses a murder and falls into a catatonic shock. We find out the killer at the hotel was one of the best psychiatrists and he convinces the husband to admit her into his private clinic. Has the classic features of a man falling for a femme fatale.

Bret G
June 30, 2012
'Shock' doesn't fulfill the promise of its premise, but thanks in part to some finely nuanced acting from Price [really!], this noir succeeds in the end.

Eric R
½ March 12, 2012
Shock is an above average thriller about a psychologically distraught woman, Janet,who is committed to a psychiatric ward by Dr. Cross (Vincent Price), a man whom she witnessed murder his wife the night before being committed. Vincent Price kicks ass per usual, as the shady doctor who must figure out a way to keep this woman silent while not letting anyone else discover his secret. Dr. Cross is a well-rounded dimensional character whose crime of passion forces him deeper and deeper into the point of no return. He is never painted as an evil man, rather a confused man, wrestling with his inner demons and guilt, which begins to take it's toll on his mental state. The film is just average in terms of visuals but it does features a great nightmare sequence in the beginning of the film. Janet fear of her husband never returning from WWII is realized in this sequence, and it's a pretty creepy and well done. All and all it's Vincent Price playing a shady character, which is always fun but it's nothing particularly special.

Amanda C
½ October 6, 2011
I didn't know who I was supposed to be rooting for, because the heroine hardly seemed to be in it or to have an active role. Vincent Price's character was interesting, but not nearly as complex or realistic as they tried to make him. The movie was nowhere as psychologically interesting as "Gaslight" and therefore a disappointment when I usually enjoy Price films so much.

Blake P
August 18, 2011
Impressive movie! While waiting in her hotel room, Janet Stewart (Shaw) sees something terrifying-- a murder! When falling into a comatose state, shes forced into a mental hospital. Little does she know that the doctor treating her, Dr. Richard Cross (Price), is actually the murderer. With the help of his nurse/lover (Bari), Cross has to force Stewart to think the murder didnt happen-- will it work? Shock is a unknown little gem that surprised me way beyond what I had thought. The short 70 minutes was throughly entertaining, I was shocked a movie so little could be so big. The acting (especially from the usually scary Vincent Price) is excellent, never over-the-top, or melodramatic, just straight up. Little known director Alfred Lewis is great as well, I never thought a B- guy could do so good. The cinematography, the music is all perfect for this good film noir, so fans of the genre like me will surely find it worth their while. Shock will shock you, trust me.

Josh T
July 21, 2011
Every Price fan should see this film, this was among his beginning in the horror and thriller genre which would lead to one of the greatest careers in cinema history.

Luke W
July 14, 2011
Vincent Price plays a psychiatrist with conflicted loyalties in this relatively short feature. While leading lady Anabel Shaw is far too hammy most of the time, the story is compelling enough to carry her, but the story is pretty slowgoing even for a 40s film, which might test the patience of some viewers.
Page 1 of 4