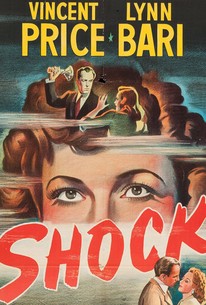 In this thriller, psychiatrist Dr. Cross (Vincent Price) kills his wife and expects to get away with murder, until he discovers that the slaying was observed by a next-door neighbor, Janet Stewart (Anabel Shaw). As Janet attempts to convince her husband (Frank Latimore) of the doctor's dastardly deed, Cross shows up to advise him that Janet is in dire need of some in-depth counseling.

Cecil Weston
as Patient
View All

A vast studio like Twentieth Century-Fox... seldom can afford to experiment. But, when the budget is held down and young blood is called in, it is interesting to note that even so unwieldy an organization can achieve a rather dull imitation of Gaslight.

...not even remotely as effective as its premise might've indicated.

As always, Vincent Price is suited to be a fine villain.

Vinnie kills his nagging wife in a flyaway moment of rage, but is seen by an hapless innocent busy looking for her husband, and so begins this little bit o'sinister as Vinnie wonders about whether he can be a coldblooded killer, whether he is, or maybe he was just trying it out for size, one time, no harm, no foul. Not bad.

Nice nostalgic thriller featuring the indomitable Mr. Vincent Price as a psychiatrist caught between his manipulative mistress and his ever weakening sense of morality. Shock isn't groundbreaking cinema but it's a solid vehicle for Price's villainous screen persona.

Price is shocking in this movie. I recommend seeing it without reading the synopsis or anything first, it's more shocking that way. I love this movie and was shocked to find that it is featured on almost every one of those 50 movie pack DVD boxes. Anyway, if you love Vincent Price, check this out.

Enjoyable if a trifle overwrought B level thriller obviously designed to play the lower half of a double bill. Taking that into consideration this is an interesting artifact of its time with some overly arch performances but not from Vincent Price who offers up the best job herein. It's also directed at a nice clip that keeps it moving right along to tell its story in an efficient hour and ten minutes. Before viewing keep in mind this is a thriller from the 40's and not a horror film from Price's later career phase as the king of that genre.