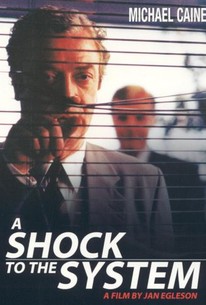 A Shock to the System Photos

In this black comedy, middle-aged advertising executive Michael Caine loses his long-awaited promotion to a younger man. In frustration, Caine accidentally pushes a panhandler in front of a subway train -- and he gets away with the death. He then begins plotting the murder of several of his corporate enemies.

Will Patton
as Lt. Laker

Mike Cicchetti
as Beggar in Subway

Critic Reviews for A Shock to the System

What's remarkable is that you come away from the movie laughing at Graham's murderous indiscretions and yet you're frightened by them too. Caine makes you taste the ashes in this black comedy.

What might have seemed bafflingly inconsistent behavior in the hands of a lesser performer is here synthesized by Caine's relaxed and subtle work into a more complex characterization.

Sleek and brimming with giddy cruelty, A Shock to the System has more unexpected turns and twists than the hedge labyrinth in The Shining.

Egleson and Klavan know exactly what their themes are, and they've got the guts and brains to carry them through. Besides, whenever their efforts flag, Michael Caine's exceptional performance is always a compensation.

It's "How to Succeed in Business" with a vengeance -- a wickedly entertaining black diamond of a satire that reminds us how unobtrusively, elegantly, economically and sympathetically Came can inhabit a character when he's in top form.

A thriller should make an audience sit on the edge of its collective seat, waiting tensely for the next moment of action. "A Shock to the System" brings a reaction of "So what," far too early and far too often.

A deliciously dark comedy in a minor, murderous key...one of the many minor gems on Michael Caine's cinema resume.

There's a lot going for this picture, aside from Caine's winning performance.

Early on the film has some novel observant moments, but they stop coming once the bodies start mounting.

...a misguided (and rather misbegotten) adaptation of Brett's superior book.

A Shock to the System shows what happens in the office when cutthroat competition becomes the norm.

Audience Reviews for A Shock to the System

I hardly remember anything about this film except I loved it. I'd really like to see this one again.

A Shock to the System Quotes