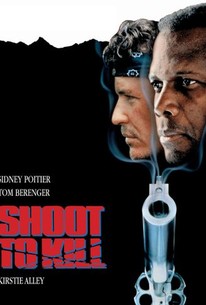 Sidney Poitier makes his long-overdue return to films in the 1988 thriller Shoot to Kill. Poitier plays an FBI agent, on the trail of an elusive killer. Reluctantly teamed with tracker Tom Berenger, the citified Poitier braves the wilds of the Pacific Northwest in search of his quarry. For Berenger, the pursuit is personal; the killer, whose identity is not immediately revealed, has joined a hunting party being guided through the country by the tracker's girlfriend Kirstie Alley. Though only bearing the slightest resemblance to Real Life (you'll love the scene between lifelong city-dweller Poitier and a huge grizzly bear), Shoot to Kill delivers the goods in the suspense department.

Michele Goodger
as Woman with Stroller

Michelle Goodger
as Woman with Stroller

Maryanna Danguy
as Woman in Couple

Craig Saunders
as Man in Couple

Carole Henshall
as Woman with Purse

Claire Brown
as Mildred
View All

It marks Sidney Poitier's return to acting after 10 years behind the camera. He is probably not going to win any awards for this performance, but it's nice to have him back.

It's good to have veteran and able actor Sidney Poitier back on the screen again, and his contribution to Shoot to Kill helps make this action-thriller set in the mountain wilds of the Northwest a slick and satisfying film.

A gripping manhunt thriller that's also part buddy movie and part outdoor, man-against-the-elements adventure. Might have been taken for granted in 1988, but Shoot to Kill is a corker by today's standards.

An underrated, well-directed action flick with a superb performance by Sidney Poitier.

Shoot to Kill is a rip-roaring movie from start to finish.

You'll feel the sweat dripping off your back. Thrilling beyond belief.

Starts brilliantly but reveals the killer too soon leaving the tension to just evaporate away. Shame.

A truly unique 80s action thriller: in order to chase a killer and diamond thief, an FBI agent (Poitier) has to team up with an expert hiker (Berenger) whose girlfriend (Alley) leads a group of men through the mountains to the Canadian border, among them: the killer. The movie takes this idea and creates a breathless trip through beautiful scenery, adding lots of action, suspense and guessing which one of the hikers the killer actually is. Additionally, Poitier's performance adds so much humor to the excitement that you won't look at your watch once during the movie. Some minor plot holes at the connection points to the showdown back in civilization don't really ruin the overall perfect impression this movie leaves, especially the first time you see it. A little known gem of the genre. Not only for fans. They just don't make such action thrillers anymore!

A genuine whodunnit classic...one of Sidney Poitier's and Tom Berringer's best team-up to date. A must see.

Good thriller with Sidney Poitier at 63 when the film was shot, looks little more than 40.