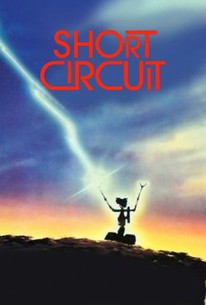 Critics Consensus: Amiable and good-natured but also shallow and predictable, Short Circuit is hardly as deep or emotionally resonant as E.T. -- though Johnny Five makes for a charming robot protagonist.

Critics Consensus: Amiable and good-natured but also shallow and predictable, Short Circuit is hardly as deep or emotionally resonant as E.T. -- though Johnny Five makes for a charming robot protagonist.

Critic Consensus: Amiable and good-natured but also shallow and predictable, Short Circuit is hardly as deep or emotionally resonant as E.T. -- though Johnny Five makes for a charming robot protagonist.

An intelligent, lovable robot known as "Number 5" escapes from a secret research facility and learns to interact with the world at large in this successful comedy. The project's chief technician attempts to track down the slapstick-prone robot before it is destroyed by the military.

Tim Blaney
as Voice of No. 5

Folks who like tweaking the Army or those with a special fondness for adorable robots may enjoy this harmless, reasonably funny film.

The film has nowhere to go except to give us a predictable initial confrontation between Guttenberg and Sheedy over military weapons.

One of the stranger ironies to be found in Hollywood these days is that some of its most resourceful directors use high-tech wizardry and state-of- the-art movie technology to make films that rail against the tyranny of science.

A film that demands emotional connections with a robot whose voice is one of the most annoying ever produced. Give us Hal, R2-D2 or a barber shop quartet of Daleks any day.

Scripters get credit for some terrific dialog that would have been a lot less disarming if not for the winsome robot and Sheedy's affection for it. Guttenberg plays his best goofy self.

A message film to please all ages.

It's the charming machine and his damsel-in-distress who keep the picture afloat, putting a twist on conventional movie romances.

In the spectrum of "Mac and Me," and "E.T.," its right there smack dab in the middle with "Batteries Not Included."

Number Five is the real star of this energetic film. Sheedy, Guttenberg and company are just supporting players.

Youngsters will love this hip spoof on hardware movies.

No movie with Austin Pendleton can be all bad, but this one makes a game try.

Amusing, creative and memorable Sci Fi comedy, Short Circuit is a well crafted picture with some good effects, fun performance by its well chosen cast, and it is a terrific genre film that is worth seeing if you enjoy these types of movies. The film is entertaining for what it is, and it's one of those 80's films that really stand out due to a good story, wonderful performances and great effects. I very much enjoyed the film, and I felt that it was among the best genre films of that decade. Ally Sheedy is quite good here, and she really brings out the best out of the film. Short Circuit is well worth seeing if you enjoy the genre, and it's an entertaining film from start to finish that boasts a good story and fun performances. Short Circuit is a good film for what it is, and it's one of the more memorable comedies of the 80's. Although the film is not perfect, for the most part, I thought that the film's weaknesses were not prominent due to the good ideas displayed on-screen. If you enjoy a good 80's comedy with Sci Fi elements, give Short Circuit a shot, it is an entertaining picture from start to finish. With great effects, memorable performances and a good story, Short Circuit is an engaging picture that is worth seeing if you enjoy 80's cinema. The cast here are well chosen in the parts they play and with effective direction, the film becomes a worthwhile viewing experience that is lots of fun from start to finish. Due to its ideas and concept. Watching the film, you can forget about the weak aspects of the film, and it's a movie that still looks quite good by today's standards.

a great character Johnny 5 and great comedy, and a great plot, with lovable characters, and great acting

A fun family film about a robot, somewhat like the new Wall-E movie, but with real people. I really liked this movie, it's a fun adventure.