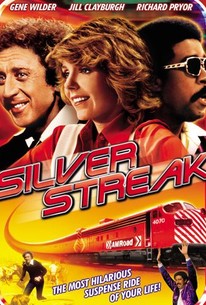 While taking a train trip from L.A. to Chicago, mild-mannered George Caldwell (Gene Wilder) makes the acquaintance of Hilly Burns (Jill Clayburgh). As they indulge in a brief bit of spooning, Hilly tells George that her boss is on the verge of exposing a group of vicious art forgers. Later that evening, George sees the body of Hilly's boss being thrown off of the train. Detective Sweet (Ned Beatty) agrees to investigate, but he too is bumped off. The instigator of these outrages is master forger Roger Devereau (Patrick McGoohan), who, with his crony Mr. Whiney (Ray Walston) is planning a particularly diabolical crime. Worse still, they take Hilly prisoner so she can't tip off the cops. When George is also targeted for elimination, he manages in slapstick fashion to elude the killers. Falling off the train, he ends up being arrested on some trumped-up charge or other by a local sheriff. He makes his escape in the company of petty thief Grover Muldoon (Richard Pryor) -- and that's only the beginning. A box-office smash, Silver Streak paved the way for the equally successful 1980 Wilder-Pryor vehicle Stir Crazy. ~ Hal Erickson, Rovi

Harvey Atkin
as Conventioneer
View All

Like a Mel Brooks comic spellbinder, merged with some of the flavor of Inspector Clouseau.

You never really get angry at it. You just want to shake it up because the elements for a first-class comedy thriller are all there. It's simply .that everything is always ten per cent off.

It could have been a lot funnier if Wilder was a more gifted comic.

Unfortunately this 30+ year old comedy-murder mystery has dated, but Wilder and Pryor are great in first pairing.

Hitchcockian in nature, the film goes down very pleasantly with just the right mix of humor and suspense.

...the entire film might just be worth a look for the sequence in which Pryor teaches Wilder how to be black.

A nifty little Hitchcock knockoff, with great chemistry between Wilder and Pryor.

Amusing comedy, but Pryor is not in it enough. Once they're together, it's gold.

Not the funniest of films that this pairing (Wilder/Pryor) have been in together, but easy watching any how. Very much like a lot of train movies, which involve, strange goings on, murder, kidnap and confusion.

The sad case of a childhood favorite that didn't stand the test of time as well as hoped. Especially the set up of this crime comedy about a man witnessing a murder on a train trip from L.A. to Chicago, is rather slow. Once the plot thickens things are rather interesting, and it's pretty funny to behold how often George has to get back on the train. The longer the film is running the better its timing works, and the showdown and final crash into Chicago train station is breath taking and spectacular. Not a flawless film by any means, once the nostalgia wears off, but still very decent entertainment.

Probably the best Hitchcockian comedy. Not mind-blowing but a good Saturday Afternoon flick.

Probably the main film for Wilder and Pryor in their careers but in my opinion not their best film together, second best behind 'Stir Crazy'. This is still brilliant stuff mixing proper thrills and actual nasty murder for Wilder with his usual wild eyed lunacy haha the film isn't hilarious as you may expect and is kinda slow burning from the start as the plot builds plus Pryor doesn't come into the fun till about halfway. The giggles do arise when Pryor enters the fray naturally and the film does pick up at that point, until then its a kind of semi serious murder mystery on a train with a slice of 'Hitchcock' blended in which is fine but not stunning. This is an old film now and it is pretty dated but it does still entertain as Wilder will always do no matter what year it is. The cast is classic, especially Patrick McGoohan with his 'Dick Dastardly' type villain, the scenery is quite stunning throughout the train journey, gentle musical score and the finale is still pretty impressive with the train wreck, amazing effects back in the day. A soft, pleasant, relaxing Sunday afternoon film which will make you smile and tweak your senses with a dash of murder most foul :)