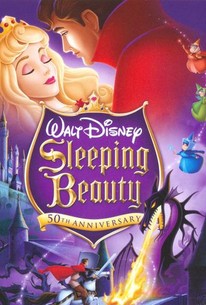 Critics Consensus: This Disney dreamscape contains moments of grandeur, with its lush colors, magical air, one of the most menacing villains in the Disney canon.

Critics Consensus: This Disney dreamscape contains moments of grandeur, with its lush colors, magical air, one of the most menacing villains in the Disney canon.

Critic Consensus: This Disney dreamscape contains moments of grandeur, with its lush colors, magical air, one of the most menacing villains in the Disney canon.

Disney produced this lavish animated fairy tale, the most expensive cartoon ever made up to its release with a budget of $6 million. When the young princess Aurora is cursed at birth by the evil fairy Maleficent, the baby is kidnapped by a trio of good fairies who raise the girl themselves, hoping to avoid the spell's fulfillment. Nevertheless, at the age of 16, the beautiful Aurora falls into a deep sleep that can only be awakened by a kiss from her betrothed, Prince Phillip. Knowing that Phillip intends to save Aurora, Maleficent takes him prisoner. When the good fairies launch a rescue attempt, Maleficent transforms herself into a spectacular fire-breathing dragon, forcing Phillip to defeat her in mortal combat. Sleeping Beauty (1959) was Oscar nominated for its musical score, which featured adaptations of Tchaikovsky compositions. ~ Karl Williams, Rovi

Marvin Miller
as Narrator
View All

It is a picture that will charm the young and tickle adults, since the old fairy tale has been transferred to the screen by a Disney who kept his tongue in his cheek throughout the film's animation.

At once modernist and classical, Disney's Sleeping Beauty takes characters who look like paper cutouts from magazine cartoons and sets them against backdrops that look like expensive wallpaper patterns.

The masterpiece of the Disney Studios' postwar style.

The hero and heroine are sugar sculpture, and the witch looks like a clumsy tracing from a Charles Addams cartoon.

Mary Costa's rich and expressive voice for the title character gives substance and strength to it.

Maleficent is a ferocious creation...

Sleeping Beauty is romance and pageantry, humor and pathos. It's excitement and conflict, magic and counter-magic. It's fun.

Perhaps most impressive of all is the dark witch's design and scripting - she's unlike any Disney antagonist before her.

Walt Disney's latest, costliest feature-length cartoon. It probably will make millions in dollars, pounds, marks and other currencies but there is a dismaying monster-horror bigness in this inflated version of the fairy-tale.

Consistently has the aura of an old fairy tale, lovingly told, and the ingenious use of Tchaikovsky's ballet as the film's score reinforces its timelessness.

The most expensive and ambitious Disney animation for the time it was conceived may be regarded by many as a classic with a unique art style, yet I still fail to see much past its impressive technical achievements and be so thrilled about it with regard to its conventional narrative.

The 1950's was definitely the definitive decade for Disney films, giving us many many beloved classics. Just at the end of that decade came a little film called "Sleeping Beauty," and what. Great way to end off that decade. This film, from it's beautiful tale, to it's fun and meaningful musical score and soundtrack is something that should be seen forever by children. This film teaches many lessons, while still holding that fairytale feel as well. This is not my favourite of the Classic Disney cartoons, but it ranks highly, as I was touched by many scenes. It is funny, charming, and heartwarming. "Sleeping Beauty" is a terrific film.

Quite dark for a princess story, Sleeping Beauty succeeds because of the beautiful animation and its iconic villain. These elements help it avoid becoming just another fairy tale movie.