Something to Sing About1937 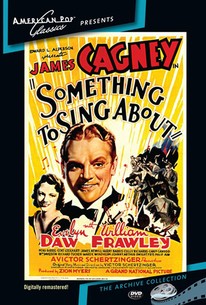 Something to Sing About Photos

Battling Hoofer is the reissue title of the 1936 James Cagney vehicle Something to Sing About. Cagney plays Terry Rooney, a New York bandleader who heads to Hollywood when he is offered a movie contract. The down-to-Earth Rooney resists the "star treatment," an attitude misinterpreted by movie executive Bennett O. Regan (Gene Lockhart) as arrogance. When Terry's first film is a hit, Regan orders everyone involved to keep its success a secret from Terry, lest he develop a swelled head! (We don't believe it either.) The best sequence has Rooney chewing out his Asian houseboy, Ito (Philip Ahn), whereupon he drops his "So solly" pidgin English and begins talking like a Harvard professor! Terry gets to romance newcomer Evelyn Daw, as well as veteran vamp Mona Barrie; he also gets to participate in several lively dance numbers. Something to Sing About was the second of Jimmy Cagney's films for Poverty Row studio Grand National: the production values and snappy script work that he might have enjoyed at Warner Bros. are noticeably lacking, but Cagney is always fun to watch.

William B. Davidson
as Cafe manager

Duke Green
as Other Man/Stuntman

The Vagabonds
as Specialty

Critic Reviews for Something to Sing About

Cagney still Cagney in a song-anddance picture of backstage Hollywood. Better not do this often.

What fun there is in Something to Sing About is in watching [James] Cagney dancing, fighting, and even dally. ing over the telephone.

Cagney is a treat to watch as he spoofs, hoofs and romances.

The higher rating for this low budget musical is for Cagney's great dance sequences.

Audience Reviews for Something to Sing About

There are no featured audience reviews yet. Click the link below to see what others say about Something to Sing About!

Something to Sing About Quotes