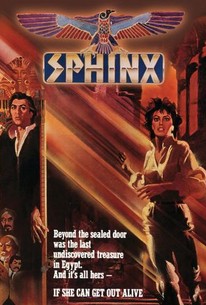 After a string of hits that included Planet of the Apes (1968), Patton (1970), Papillon (1973), and The Boys from Brazil (1978), director Franklin J. Schaffner stumbled badly with this expensive wannabe cousin to Raiders of the Lost Ark (1981). Based on a novel by author Robin Cook, this romance-adventure stars Lesley-Anne Down as Erica Baron, a female archaeologist who is searching for a lost Egyptian tomb, hoping that she will be responsible for the next discovery along the lines of King Tut's Tomb. Erica witnesses the murder of a native, Abdu Hamdi (John Gielgud doing his best Alec Guinness impersonation) and when she attempts to solve the crime, she becomes the target of a campaign to kill her using a variety of creative methods, including bats and entombment. In the course of her adventures, Erica also falls in love with a handsome Egyptologist, Ahmed Khazzan (Frank Langella). Sphinx (1981) was a box office disaster from which Schaffner never recovered, directing only three more pictures.

Lesley-Anne Down
as Erica Baron

Mark Kingston
as Carter
View All

Entertaining at times, Sphinx is a spectacle that dabbles in different genres and esthetics with the intention of pleasing everyone a little bit, but fails to thrill anybody. [Full Review in Spanish]