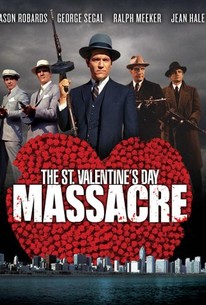 Schlockmeister Roger Corman produced this graphically violent chronicle of the Chicago gangster wars of the 1920s and the events that lead to the bloody title showdown between rival mobsters Al Capone (Jason Robards) and Bugs Moran (Ralph Meeker) that marked a brutal end to a terrifying era. Fred Steiner's film score is effectively mixed with popular songs from the 1920s, and the re-creation of gangster-era Chicago is a credit to the set designers. Historic and insightful narration is dramatically provided by Paul Frees, giving the film the flavor of a docudrama. Jean Hale plays Moran's gun moll, who is mercilessly kneed in the stomach while arguing over a fur coat. Though The St. Valentine's Day Massacre was heralded by critics at the time of its initial release, their opinion of the film has changed with each decade as they waver on the cinematic value of all of Corman's work. Audiences continue to relish the film, which is often shown on the anniversary of the bloody executions. Watch for Jack Nicholson as one of the unfortunate victims. ~ Dan Pavlides, Rovi

Bruce Dern
as John May

Phil Haran
as Capone's Board Member

Bob Brandin
as Capone's Board Member

Ernesto Moralli
as Capone's Board Member

Nick Borgani
as Capone's Board Member

Joan Shawlee
as Edna
View All

At the end of this nonsense, to be sure, there is a massacre to brighten things up a little. But then the pall sets in again.

The carefully stylized violence and reconstruction of that era comes off very well.

It's a cool, violent film, romantic in a disciplined, disenchanted way about its battling gangsters.

Corman is adept at creating human moments between the plot points, reminding us of the little guys caught up in the war and the human cost of the violence...

Roger Corman's rat-tat-tat helming is one of the strengths of this crime flick ... What damages the picture are the performances by the two top-billed stars, Jason Robards and George Segal.

Corman fans should really see this one, it's very different from his other films, it's like a biographical/historical account of the St. Valentines Day Massacre events, which not many people know much about these days. I learned a lot from it, and it's entertaining too.

Concise, efective and entertaining depiction of the notorious bloodshed unleashed by Capone and Moran in 1920s Chicago. Inherits the narrative vigor and rhythm of urgency of the classic gangster flicks.