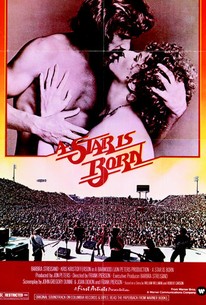 Critics Consensus: A lack of memorable music, chemistry between its leads, and an overlong runtime prompts this modish iteration of A Star is Born to fizzle out quickly.

Critics Consensus: A lack of memorable music, chemistry between its leads, and an overlong runtime prompts this modish iteration of A Star is Born to fizzle out quickly.

Critic Consensus: A lack of memorable music, chemistry between its leads, and an overlong runtime prompts this modish iteration of A Star is Born to fizzle out quickly.

A Star is Born Photos

The third remake of the 1932 drama What Price Hollywood?, this adaptation of A Star Is Born moved the story into the mid-1970's and changed the milieu from the movie business to pop music. John Norman Howard (Kris Kristofferson) is a rock star whose career has peaked; he is numbed by booze and cocaine, his music has lost its edge, and his performances have become painfully haphazard. One night, after a concert, he stumbles into a club where he sees a singing group fronted by Esther Hoffman (Barbra Streisand). John likes what he hears and loves what he sees; he tries picking her up, but soon realizes if he wants to see her, he'll have to ask her out on an actual date. He does, and before long the two become involved, although Esther has trouble with John's rock star lifestyle. One night, a typically burned-out John lets Esther sing a few songs at one of his shows; before long she's the talk of the record business. While Esther's star begins to rise, John's continues to sink, and while she desperately tries get John to clean up and focus on his music, it may be too late to save him. The song "Evergreen" earned this film an Academy Award for Best Song; the credits contain the amusing notice, "Ms. Streisand's Clothes from ... Her Closet."

Vanetta Fields
as The Oreo

Clyde King
as One of the Oreos

Clydie King
as The Oreo

Tony Orlando
as Himself

Stephen Bruton
as The Speedway

Venetta Fields
as One of the Oreos
View All

Critic Reviews for A Star is Born

A Star is Born rarely stops seeming manufactured; it can't disguise its manipulations or the process of the storytelling. You see the tangled strings, not the puppets.

The trouble with rock 'n' roll in A Star Is Born is that there isn't any. The soundtrack is filled with homogenized harmonics passing for rock, but not a single song is good enough even to be counterfeit.

Barbra Streisand's fantastic singing voice shows to the best advantage her incredible talent. The movie falls short of greatness, but it compares more than favorably not only with the usual concert film but also with the current love stories on film.

The new A Star Is Born has the rare distinction of being a superlative remake.

This version vaunts its modernity by vulgarising everything in sight.

Barbara Streisand. Is. A Star Is Born. And two-shots have never been so completely arbitrary.

Get the old message, girls, and in pounding stereo -- you still can't have a career and a man. Not that your man will actively hold you back -- he'll just destroy himself in protest.

Only required if you're crazy for Streisand.

For the most part, A Star Is Born is a dull, indistinguishable remake that reeks with that omni-present Streisand ego.

This new version follows the previous three in its broad outline, but there are differences. To make room for a number of songs, characterization has suffered.

Having seen both Janet Gaynor and Judy Garland (several times) one can only say that this picture as a re-re-make, suffers by comparison and so does its star (not him, but her)... But, it is also a film with two stars who are well worth seeing.

Not even the musical numbers are safe from this general disaster. [Full Review in Spanish]

Audience Reviews for A Star is Born

Barbra Streisand is bizarrely miscast and has no chemistry whatsoever with Kris Kristofferson, which makes it baffling to see a movie so completely lost about what it is doing, as it can't even realize that its two singing characters would never have the same public in real life.

Very good movie. As always Barbara Streisand has a phonoemenal voice and despite Kris Kristostofferson's hairyness and his drug and alchohol abuse it was a very good movie.

Barbra sings like an angel but this is a crass vulgar shadow of the classic Judy version. Stick with that one

A Star is Born Quotes