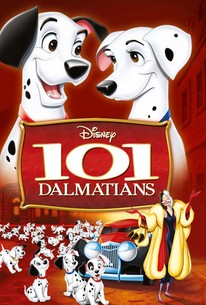 Critics Consensus: With plenty of pooches and a memorable villain (Cruella De Vil), this is one of Disney's most enduring, entertaining animated films.

Critics Consensus: With plenty of pooches and a memorable villain (Cruella De Vil), this is one of Disney's most enduring, entertaining animated films.

Critic Consensus: With plenty of pooches and a memorable villain (Cruella De Vil), this is one of Disney's most enduring, entertaining animated films.

This Disney animated classic is based on the children's story by Dodie Smith. The story involves the canine pets of a struggling composer and his wife: Dalmatians Pongo (male) and Perdita (female). Perdita gives birth to fifteen spotted pups, cuing the entrance of the scheming Cruella De Vil. She demands that the dogs' owners sell her the pups, but she is shown the door instead. Under cover of night, Cruella arranges for the pups to be stolen. The human police are baffled, but the "dog network" is alerted by Pongo and sent to rescue the pups. It is discovered that Cruella has been rounding up every Dalmatian she can get her hands on, hoping to use their pelts to make one spectacular fur coat. The dogs rescue the 15 pups, plus 86 others stolen by Ms. DeVil. After an eventful escape, the 101 Dalmatians make their way home--whereupon the composer pens a hit tune, "Dalmatian Plantation". 101 Dalmatians represents the Disney animation staff at its very best, and as a bonus introduces the world to Cruella De Vil, one of the greatest movie villains--cartoon or "real"--of all time. ~ Hal Erickson, Rovi

Mickey Maga
as Patch the Puppy

Barbara Beaird
as Holly the Puppy

Jeanne Bruns
as Voice
View All

The fairly long in the tooth child, through whose eyes most Disney dramas, live or otherwise, are seen, seems to have grown up Just a little; a fact which should please adults while not offending the young.

However much the film breaks with Disney tradition, it's still a winning effort that mixes cuteness with dry wit in the service of a fast-paced, emotionally charged adventure tale.

Lovable cartoon classic for all ages.

It is the wittiest, most charming, least pretentious cartoon feature Walt Disney has ever made.

While not as indelibly enchanting or inspired as some of the studio's most unforgettable animated endeavors, this is nonetheless a painstaking creative effort.

Cruella looms over it all.

Cruella De Vil is one of the finest villains ever to grace an animated feature - as well as one of the most memorable evildoers in the entirety of cinema.

Dazzling hand-drawn animation, cute canine heroes and a delightfully nasty villainess all combine to make this a pedigree film.

One of the most striking Disney films of the classic era, with its almost impressionistic pencil drawings and dazzling use of color.

It is just about perfect.

One of the most entirely fun, entertaining of all Disney features.

With a gorgeous animation job using xerography that ranks among the best the studio has ever done - though Walt Disney strongly disliked it - this is a very entertaining film that also offers a memorable villain and knows well how to create suspense in scenes of danger.

Classic in every aspect with a wonderful script and memorable characters, all equaling one of Disney's best animated films.