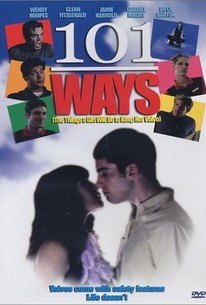 Watson (Wendy Hoopes) is a woman in her early twenties who has recently graduated from college and is hoping to make a career for herself as a novelist. Looking for new horizons, Watson has left New York City for the more inviting climate of suburban Connecticut. However, Watson made the mistake of taking her mother's advice and buying a new Volvo, and while Watson dearly loves her car, now she has to find a way to keep up the payments. With jobs in her field not exactly easy to come by, Watson finds herself working a variety of odd and embarrassing jobs to cover her bills, ranging from supermarket checkout clerk to answering calls for a phone sex outfit. 101 Ways (The Things a Girl Will Do to Keep Her Volvo) was the first feature from writer and director Jennifer B. Katz. By the way, if leading lady Wendy Hoopes's voice sounds a bit familiar, it might be because she provided the voice of Jane Lane on the animated television series Daria.

Sam Freed
as Off. Wright

Ken Marino
as Off. Russotelli

Joseph Siravo
as Valentino
View All

There are no critic reviews yet for 101 Ways (The Things a Girl Will Do to Keep Her Volvo). Keep checking Rotten Tomatoes for updates!

There are no featured reviews for 101 Ways (The Things a Girl Will Do to Keep Her Volvo) at this time.