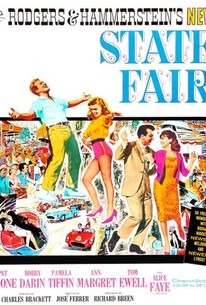 This is the third time around for the Rodgers and Hammerstein musical. The action takes place in urban Texas instead of the traditional setting in rural Iowa. This film version contains five extra songs written exclusively by Richard Rodgers. Box office results were adequate at best, and movie going public deemed this version the least interesting of the three. The youth audience was lured by the casting of Ann-Margaret, Pat Boone and Bobby Darin. Alice Faye returned to the big screen after a sixteen year absence as Melissa Frake. Tom Ewell plays her husband, Abel. The plot finds a family traveling to Dallas for the Texas State Fair. Singing commences on the ferris wheel, the merry-go-round and in other locales. The only real action is the anticipation of a drag race between Wayne (Pat Boone) and the carrot topped, malevolent motorhead Red (Edward "Tap" Canutt).

Tony Zoppi
as The Masher

Meat Loaf
as Boy In Stands

Hampered by flat performances (only Ann-Margret provides any spark) and negligible new tunes.

New and old songs, young and veteran stars (like Alice Faye) are all highly attractive.

The story has been "updated" and unaccountably shifted from Stong's Iowa to Texas, but the handling of the musical numbers is stodgy and old-fashioned.

Some of the big numbers are staged with a static camera in front of a lot of dancers, a technique which felt dated even in 1962. It doesn't help that the songs aren't particularly memorable.

At least kind of fun in a zero-aspiring, Pat Boone sort of way.

Try the 1945 if you have to have a musical. Otherwise, try the 1933 Will Rogers picture

There are no featured audience reviews yet. Click the link below to see what others say about State Fair!