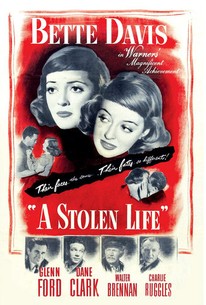 In this romantic melodrama, Bette Davis plays twin sisters for the first time (she would do so again in 1964's Dead Ringer). Kate Bosworth (Davis) is a sincere, demure girl and talented artist. Her twin sister Pat (also Davis) is a flamboyant, man-hungry manipulator. Orphans, the girls' guardian is their cousin, Freddie Lindley (Charles Ruggles), with whom Kate elects to spend a summer on Martha's Vineyard. There, she meets Bill Emerson (Glenn Ford), a handsome engineer spending a summer vacation as a lighthouse inspector. Kate falls deeply in love with Bill, but when Pat shows up, he goes for the more exciting sister, eventually marrying her. Devastated, Kate throws herself into her art, but she becomes discouraged under the tutelage of an abusive master, Karnock (Dane Clark). A sailing accident gives Kate the chance to take her sister's place -- but can she fool Bill into believing that this sweet, innocent woman is his philandering, scheming wife? A Stolen Life (1946), a remake of an earlier picture by the same name that had been produced by Paramount only seven years earlier starring Elisabeth Bergner in the twins role, was nominated for a Best Special Effects Oscar.

Critic Reviews for A Stolen Life

This unbelievable but enjoyable drama with a New England setting, is Bette Davis's first and last film as a producer.

Audience Reviews for A Stolen Life

There are no featured audience reviews yet. Click the link below to see what others say about A Stolen Life!