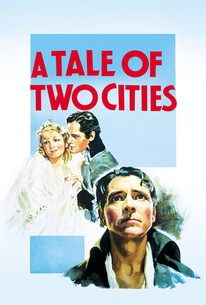 A Tale of Two Cities Photos

Jack Conway's 1935 adaptation of Charles Dickens' A Tale of Two Cities is often regarded as the finest film of the classic novel. Set during the French Revolution, the story revolves around two men -- English lawyer Sydney Carton (Ronald Colman) and French aristocrat Charles Darnay (Donald Woods) -- who share similar looks and a love for the same girl, Lucie Manette (Elizabeth Allan). In London Lucie marries Darnay, whose uncle, Marquis St. Evremonde (Basil Rathbone), is one of the most despised men in France. After St. Evremonde shows no concern for a young boy trampled by the Marquis' horse, the boy's father kills him, sparking a revolution. Darnay is persuaded to return to Paris, where he is arrested and sentenced to death. Still in love with Lucie, yet realizing his love will remain unrequited, Carton agrees to take Darnay's place on death row. Built entirely on a soundstage, the production orchestrated by producer David A. Selznick vividly captures France -- particularly Paris and the Bastille -- with its detailed photography and was an enormous success, earning Academy award nominations for Best Picture and Best Editing. The film also marks the film debut of stage star Blanche Yurka as Madame DeFarge. During the '80s, A Tale Of Two Cities was shown in a computer-colorized edition.

Edna May Oliver
as Miss Pross

Henry B. Walthall
as Dr. Manette

Fay Chaldecott
as Lucie, the Daughter

Walter Kingsford
as Victor, the Jailer

Barlowe Borland
as Jacques, No. 116

Critic Reviews for A Tale of Two Cities

A grand melodrama, filled with big emotions and stirring set pieces, but it's also incredibly dry, which holds it back from standing alongside many other classic Hollywood spectacles of the day.

It's the richly textured screenplay and the slate of stellar performances that drive this film.

A visually portentous film in production design, but I find little moving its historical and romantic drama about social injustice, honorable sacrifice, and impossible love. [Full review in Spanish]

Isabel Jewell, as the seamstress, registers unforgettably in an emotional scene of the sort most difficult to render with restraint. Ronald Colman has attained a fine maturity, and gives real depth to Sidney Carton.

There isn't much doubt that when the movies discovered Dickens they got hold of Something.

Several of the big crowd scenes, especially the storming of the Bastille, are big-budget showstoppers with thousands of extras filling the frame in a way CGI still can't match.

Selznick's last production before leaving MGM to form his own company, this lavish film is an eloquent version of Dickens classic, benefiting from Ronald Colman's suave performance and the studio's reliable stock company.

Selznick managed to create the cinematic equivalent of "the best of times" without a downside.

It's everything I expect from a Dickens adaptation: a grand, sweeping storyline; impeccable period costumes and sets; and colorful villains and selfless heroes.

Audience Reviews for A Tale of Two Cities

Ronald Colman and crew do Dickens' work justice and the cinematic values are superior to most pieces done in the era.It was worth the loss of Colman's mustache.

This is a good movie about the French Revolution, which was the high point of the film, but the low points are just about every other scene where people are talking and not doing much, which are really boring. If you've read the book, it would be interesting to compare, but otherwise I don't recommend this movie.

A Tale of Two Cities Quotes