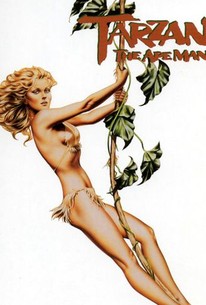 John Derek directed this 1981 vanity production of the Tarzan tale as a bon-bon for his wife Bo Derek. The Bo Derek version answers any questions viewers may have had concerning Tarzan and Jane's sex life. The film begins as Jane (Bo Derek)'s father Parker (Richard Harris) heads to the African interior on the pretext of searching for hidden jungle secrets. He is actually looking for Tarzan (Miles O'Keeffe), whom he plans to kidnap and bring back to England dead or alive. Jane accompanies her manic father, along with his unassuming assistant Holt (John Phillip Law). Realizing that Parker is on his trail, Tarzan kidnaps Jane and it is love at first sight. Parker forges on, trying to capture Tarzan and save his daughter. But Tarzan finally saves the day when Jane is kidnapped by a band of African mud worshippers, who are preparing her to be sacrificed to the gods. ~ Rovi

C.J. the Orangutan
as himself
View All

This opus will disappoint both Tarzan fans and Bo admirers.

Judging by the amount of time everybody spends swimming, the African jungle resembles Hornsey Baths filled with oversized pot plants.

Of course it's completely ridiculous, but at the same time it has a certain disarming charm.

To describe the film as inept would be to miss the point, which is to present Mrs. Derek in as many different poses, nude and seminude, as there are days of the year, all in something less than two hours.

The scriptwriters only bothered to put together a boring adventure, where the only good thing is the professional work of Richard Harris. [Full Review in Spanish]

Truly forgettable, except for Bo's booty

Silliness abounds, so much so that the picture comes off closer to a comedy than the romantic action-adventure it was meant to be.

This cinematic atrocity truly is one of the all-time worsts.

not even funny as modern irony

I saw this a long time ago and thought it was ok then. Bo Derek covered in white paint and not much else for most of the film.