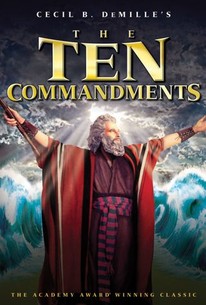 Critics Consensus: Bombastic and occasionally silly but extravagantly entertaining, Cecil B. DeMille's all-star spectacular is a muscular retelling of the great Bible story.

Critics Consensus: Bombastic and occasionally silly but extravagantly entertaining, Cecil B. DeMille's all-star spectacular is a muscular retelling of the great Bible story.

Critic Consensus: Bombastic and occasionally silly but extravagantly entertaining, Cecil B. DeMille's all-star spectacular is a muscular retelling of the great Bible story.

Based on the Holy Scriptures, with additional dialogue by several other hands, The Ten Commandments was the last film directed by Cecil B. DeMille. The story relates the life of Moses, from the time he was discovered in the bullrushes as an infant by the pharoah's daughter, to his long, hard struggle to free the Hebrews from their slavery at the hands of the Egyptians. Moses (Charlton Heston) starts out "in solid" as Pharoah's adopted son (and a whiz at designing pyramids, dispensing such construction-site advice as "Blood makes poor mortar"), but when he discovers his true Hebrew heritage, he attempts to make life easier for his people. Banished by his jealous half-brother Rameses (Yul Brynner), Moses returns fully bearded to Pharoah's court, warning that he's had a message from God and that the Egyptians had better free the Hebrews post-haste if they know what's good for them. Only after the Deadly Plagues have decimated Egypt does Rameses give in. As the Hebrews reach the Red Sea, they discover that Rameses has gone back on his word and plans to have them all killed. But Moses rescues his people with a little Divine legerdemain by parting the Seas. Later, Moses is again confronted by God on Mt. Sinai, who delivers unto him the Ten Commandments. Meanwhile, the Hebrews, led by the duplicitous Dathan (Edward G. Robinson), are forgetting their religion and behaving like libertines. "Where's your Moses now?" brays Dathan in the manner of a Lower East Side gangster. He soon finds out. DeMille's The Ten Commandments may not be the most subtle and sophisticated entertainment ever concocted, but it tells its story with a clarity and vitality that few Biblical scholars have ever been able to duplicate. It is very likely the most eventful 219 minutes ever recorded to film--and who's to say that Nefertiri (Anne Baxter) didn't make speeches like, "Oh, Moses, Moses, you splendid, stubborn, adorable fool"? ~ Hal Erickson, Rovi

John Miljan
as The Blind One

Ian Keith
as Rameses I

Woody Strode
as King of Ethiopia

Henry Brandon
as Commander of the Hosts

Henry Corden
as Sheik of Ezion

Jeane Wood
as Slave, Hebrew at Crag and Corridor, Hebrew at Golden Calf

Steve Darrell
as Man with Bedding

Cecil B. DeMille
as Narrator

Keith Richards (I)
View All

Critic Reviews for The Ten Commandments

It is all a grandly unrestrained act of regression to the infantile days of the cinema, which DeMille seems never to have outgrown.

There is no other picture like it. There will be none. If it could be summed up in a word, the word would be sublime. And the man responsible for that, when all is said and done is Cecil B. DeMille.

DeMille's direction of the action is superb and the various roles are played with feeling by a large and competent cast, headed by Charlton Heston.

It seems as if some films are perpetually being restored, with each new version touted as better than the last. That said, I can assure you that the new DVD and Blu-ray edition of...

With a running time of nearly four hours, Cecil B. De Mille's last feature and most extravagant blockbuster is full of the absurdities and vulgarities one expects, but it isn't boring for a minute.

DeMille remains conventional with the motion picture as an art form. The eyes of the onlooker are filled with spectacle. Emotional tug is sometimes lacking.

Whatever its dramatic and religious shortcomings, the film grapples -- and often tellingly -- with subject matter of great importance for this or any year.

Cecil B. DeMille set out not just to be entertaining but to do as much justice to the Moses saga as he could, with as much awe and pomp and grandeur as the Fifties studio system could muster. He succeeded spectacularly.

As The Ten Commandments hits its sixty-fifth anniversary, it is once again being celebrated and has been given a true makeover.

The Ten Commandments may have been impressive for its time but the film horribly fails in its attempt to recreate the story of the Exodus.

Staggering as spectacle and inspirational as a Biblical tale, but it has to labor mighty hard to overcome the lamentable dialogue ("Oh, Moses, Moses, you stubborn, splendid, adorable fool!") and the poor acting by virtually all of its leading players.

Cecil B. de Mille's vastly expanded remake of his 1923 silent epic takes three hours and thirty-nine minutes to sit through, and the time, for me, often dragged heavily.

Audience Reviews for The Ten Commandments

Network television used to show this at least once a year, and always as AN EVENT. Cecil B. DeMille's swan song is a denunciation of the sinful life while gloriously wallowing in it. A big movie that has BIG implanted into it's very DNA, Hollywood style grandeur and fun, however over-the-top.

In the 1950's, big, bold ambitious epics were the norm, The Ten Commandments being one of the most famous films of the era, I quite enjoyed the film, but for me, my favorite epic is Ben-Hur. Nonetheless, this film is quite the undertaking to watch, but the performances are really what keeps you involved for the nearly four hour run time. The film has a grand story, and it boasts some impressive visuals, which for its time were quite the feat in the cinematic medium, but still hold up to this day. The Ten Commandments is a blistering picture, one that is beautifully shot, with grand, ambitious storytelling and exceptional performances. This film is one of the most engrossing film experiences that I have seen, and it's a definite classic. However, I must warn potential viewers that you must be committed in seeing this one due to its length, and it's not for everyone either. I enjoyed the movie, and I found it to be one of the best films of the genre. However, I preferred Ben-Hur a bit more. Also the film could have been a little shorter as well. Nonetheless the film is superb in every way, and the storytelling here is ambitious, and it's a compelling picture that certainly is a feat in filmmaking. The Ten Commandments is a near perfect picture that is more captivating due to its performances from its cast, and each actor brings something unique to make the film truly something remarkable. The film is worth seeing if you're a diehard film fanatic that loves all sorts of genres, and in terms of epics, this is certainly one of the biggest along with Ben-Hur, and countless others that followed. This film set the standards of filmmaking even further and it succeeds quite well at grabbing your attention, and it is a riveting, sweeping picture that you soon won't forget. However, it is a long movie, and at times you're anxious for the film to conclude, but you're invested deeply at the same time due to the very good story and great acting that you see unfolds before your eyes. Seeing The Ten Commandments, you realize that movies where they tend to focus on big, gripping and ambitious storytelling and that's the best type of films to watch.

The Ten Commandments is certainly extravagant. It was the most expensive film ever made up to that point. All exterior shots were actually photographed on location in Egypt. It employs a cast of thousands with 70 speaking parts. In an era where they really had to hire all of those people you see in the background, this was truly an epic undertaking. No computer animation. This is all practical effects. In a surprising bit of restraint, only 3 of the 10 plagues are depicted: the water turning into blood, thunder & hail storm, and killing of the oldest sons. The latter features an Angel of Death imagined as a thick, green mist that creeps through the streets claiming the lives of Egypt's firstborn sons. As memorable as that was, it pales next to one of the greatest special effects sequences of all time that follows the Exodus of over 12,000 extra. The production culminates in Moses' parting of the Red Sea in the climatic scene. Even now it's a visual feat to be admired. It was nominated for 7 Academy Awards winning 1 for Best Visual Effects. To this day, the movie is the sixth most successful ever when adjusting for inflation. It remains the yardstick by which all biblical stories must be measured.. fastfilmreviews.com

This was Cecil B.De Mille's last theatrical feature,with a running time of nearly four hours(basically the running time of 3 hours and 40 minutes which includes the opening overture,intermission, and exit music),this stunning and most extravagant blockbuster is full of absurdities and vulgarities,but in all aspects this star-studded widescreen Vista Vision and Technicolor spectacle is ravishing,and De Mille's form of showmanship,which includes his own narration,never falters. Charlton Heston might be said to achieve his apotheosis as Moses-unless one decides that it's Moses who's achieving his apotheosis as Heston-and most of the other in the star-studded epic which is based on the Holy Scriptures are comparably mythic. Simultaneously ludicrous and splendid,this epic is driven by the sort of personal conviction one almost never finds is subsequent Hollywood monoliths. The scenes with includes the parting of the Red Sea is one of the best special effects ever made. With its all-star cast that includes Yul Brenner(Rameses), Anne Baxter(Nefertiri), with Yvonne De Carlo(Sephora), Debra Paget(Lilia), John Derek(Joshua), Edward G. Robinson(Dathan), Cedric Hardwicke(Sethi), Nina Foch(Bithiah), Martha Scott(Yochabel). The film was nominated for an impressive Nine Oscars including Best Picture and Best Director(but lost the Best Picture Oscar to "Around The World in 80 Days"),and won the Oscar for Best Special Effects(John P. Fulton,with some of the effects coming from the Disney studios). If you want to see "The Ten Commandments",my advice is not to see this on television(since seeing it on TV around Easter time doesn't do any justice,or for that manner seeing it on DVD),but see this movie the way it was suppose to be seen.....in a movie theater equipped with full 70MM projection and experience it in full six-track stereophonic sound.