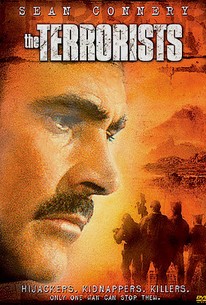 Sean Connery stars in Caspar Wrede's hostage melodrama, featuring lustrous cinematography by Sven Nykvist. A group of terrorists hijack an airplane and hold the passengers at bay until political prisoners are released. Sent in to stop them is Scandinavian government agent Nils Tahlvik (Sean Connery). The ensuing battle-of-wills gives the terrorists the edge. But when they try to make it out of the country, Nils is after them in hot pursuit. ~ Paul Brenner, Rovi

Critic Reviews for Ransom (The Terrorists)

It is an excellent fit for a lazy Sunday afternoon: pleasing its audience enough to be worth the time spent in watching it, but also inessential enough to be viewed with one eye on a smartphone or newspaper.

A typical action yarn about political terrorism that got waylaid by an intricate plot line that never quite made sense.

Audience Reviews for Ransom (The Terrorists)

There are no featured audience reviews yet. Click the link below to see what others say about Ransom (The Terrorists)!