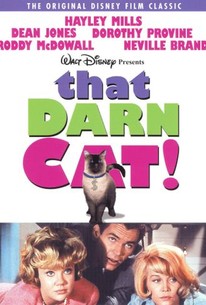 Though overlong even for a Hayley Mills vehicle, That Darn Cat is an expert blend of laughs and suspense. The eponymous feline is D.C., a Siamese belonging to sisters Hayley Mills and Dorothy Provine. One evening, D.C. comes flouncing home with a lady's wristwatch attached to her neck. The watch contains an unfinished plea for help scribbled on its back, written by Grayson Hall, a bank teller held captive in a neighboring house by robbers Neville Brand and Frank Gorshin. Mills and Provine contact the FBI, who send agent Dean Jones (who's allergic to cats) to investigate. In their efforts to locate and rescue Hall and capture the crooks, Jones and the two sisters embark upon a series of slapstick misadventures involving an unending stream of top character actors. The highlight is a lengthy sequence at the drive-in movie theatre managed by ulcerated Richard Deacon. That Darn Cat is based on Undercover Cat, a somewhat more serious suspense novel by The Gordons.

News & Interviews for That Darn Cat!

View All That Darn Cat! News

Critic Reviews for That Darn Cat!

That Darn Cat is enjoyable, perhaps even delightful holiday fare for the younger members of the family.

Robert Stevenson directed, and it's one of Disney's more watchable live-action efforts.

It's an entertaining picture.

Amusing but long romp for both adults and kids.

It is a mixture of whimsy and slapstick with the patina of slick high gloss that comes with the best efforts from the Walt Disney studios.

This should draw even better than some of Disney's recent pictures, which were a little too far-out for some of his admirers.

Audience Reviews for That Darn Cat!

Hayley Mills and Dean Jones star in this popular family favorite about a presumptuous cat that might hold the key to solving a kidnapping case. Even the crooks are more or less wholesome in this typical, if well done, Disney festival of sugar. It was better than I was willing to give it credit for being.

This is such a fun movie! I loved the story and the great actors, and of course the cat! Much better than the 90s remake.

Oooooh man... I LOVED this movie when I was a kid! No way a remake could ever redo this clever little film centered around a very clever Siamese.

Classic Disney Live-Action comedy thriller with Hayley Mills and her mischevious, going up against bank robbers and kidnappers. It's a hip groovy good time, which reflects the 60's well. Cat-lovers will adore it.