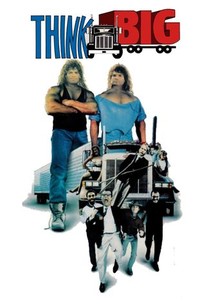 Professional wrestlers Peter Paul and David Paul star in this muscle-bound comedy about two slowwitted truck drivers who are hired to transport a heap of toxic waste across the country to Los Angeles. Along the way, the boys run into a 16-year-old girl genius who is on the run from a secret government research center because she holds plans for a mysterious secret weapon. With government agents in pursuit, the two lunkheads and the teen prodigy have to make it to L.A. with their toxic waste and avoid being captured by amoral government forces.

Peter Lupus
as Bad Guy No.1

Sal Landi
as Bad Guy No.2

David Bowe
as Security Guard No.1

Al Septien
as Security Guard No.2

Think Big offers all the generic entertainment you would expect from a film produced by a company named Motion Picture and distributed by a company called Media.