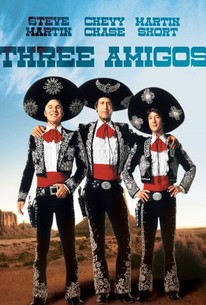 Critics Consensus: Three Amigos! stars a trio of gifted comedians and has an agreeably silly sense of humor, but they're often adrift in a dawdling story with too few laugh-out-loud moments.

Critics Consensus: Three Amigos! stars a trio of gifted comedians and has an agreeably silly sense of humor, but they're often adrift in a dawdling story with too few laugh-out-loud moments.

Critic Consensus: Three Amigos! stars a trio of gifted comedians and has an agreeably silly sense of humor, but they're often adrift in a dawdling story with too few laugh-out-loud moments.

Three silent movie actors known as the "Three Amigos" travel to a small Mexican town for what they think is a public appearance in this mild comedy. Instead, they realize they have been mistaken for their screen characters, where the townspeople ask them to help fight an evil bandit.

Brian Thompson
as German's Other Friend

Brinke Stevens
as (uncredited)
View All

If Three Amigos is disappointing, it's because the people involved have ail done better work in the past. But it's not all bad.

It's the laziness of the project that's finally most galling.

[Three Amigos is] a goofy delight. It's like a cross between a big-budget Three Stooges movie and a Hope-Crosby road picture, with dozens of old cowpoke gags thrown in to spice up the brew.

You know it's a boring comedy when you find yourself laughing only at the lead actors' costumes.

The happy-go-lucky Three Amigos is a picture to see when your expectations are down and you've already been to everything that's good.

...a tribute to traditional Hollywood tropes that celebrates without too much mocking...

Directed without much wit by John Landis.

The movie celebrates stupidity - and it is almost contagious.

It's nowhere near as funny as it should have been given the talent on show, but the chemistry between the stars and the gentle digs at the western genre make for a diverting enough entertainment.

Despite the promotional promise of Steve Martin. Chevy Chase, and Martin Short pictured under their huge sombreros, the holiday season comedy is almost as unfunny as a movie can get.

Funny and memorable, Three Amigos!, gonna make a lot of people laugh. Martin, Chase and Short are a amazingly ensemble.

John Landis has had a very spotty career. And, as much as I wanted to really like this, it is unfortunately one of his misses. The concept is a mixture of a few things, namely The Seven Samurai/The Magnificent Seven with the whole shtick about actors who get confused for the characters they play, but end up becoming like their characters. The specific plot for this high concept involves three recently fired silent era actors known for playing singing, dancing, fighting mariachis who get hired by a naive Mexican woman to save their village from a band of marauders. Due to some mixups, the trip think they're being hired for a special public appearance, not (initially) realizing that the bullets being fired at them are real this time. The director is there, the cast (Chevy Chase, Steve Martin, Martin Short) are there, and the concept is definitely there, so I have no idea what happened here. This movie is shockingly flat, dull, not really all that funny, and just a real missed opportunity. Almost all of the jokes fall flat, everything just feels really stale, contrived, and dumb, and I kept being reminded of all the better movies that this film apes off of and fails to be a successful farcical send up of. Yeah, the music (the score primarily) is good, and there's a couple of moments that did make me genuine laugh, but I really can't remember what they are sadly. Everyone seems to be on autopilot, and I just can't stress enough how dull and disappointing this is. When I saw Roger Ebert's one star review, I was surprised at how he could have disliked this movie so much. Now that I've seen it myself, it's painfully obvious. I thought that Spies Like Us was a dull effort from Landis, but this makes that one look like a damn masterpiece.

I'll preface this by saying that this a movie I grew up with and watched quite a bit between the ages of 5 and 10. I had forgotten a lot of it until seeing it again recently. It's not one that I currently watch over and over, mainly due to its being missing in any decent DVD release. Recently, Three Amigos was almost reluctantly released on Blu-ray, and I'm sad to say that I have to now nitpick this movie a bit, despite my enjoyment of it. There are things that I hadn't noticed before. First of all, the film is uneven tonally. It starts out with the scene of Carmen entering the bar looking for help. It's a dramatic western sort of scene that doesn't have any comedy in it and doesn't jive well with what follows. Second, Chevy Chase doesn't seemed all that entralled to be in this movie. Perhaps it's his deadpan comedy acting, but he seems bored to me. Third, having seen some of the cut footage, it's clear to me that the people of the village aren't set up properly. We feel no real sympathy for them because we haven't seen them in happier times, which is what was in the original opening to the film. Maybe I'm just wrong about all of this. Perhaps the final version of the film is the best that it can be. It's a strange combination of ideas that's been put together and a proper tone was probably difficult to establish in the first place. I hold it in high esteem for enjoyment and nostalgic value, but cosmetically I think I could have been better.