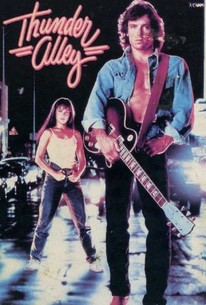 In a standard story of a band's rise to popularity broken by drugs and tragedy, the friendship of the band members is tested to the limits. Donnie (Scott McGinnis) has started a band and wants his friend Richie (Roger Wilson) to join and help them put together a winning sound. Richie overcomes his dislike of one of the group members, starts playing with them, and soon they are on the way to stardom. But their sleazy manager has been getting Donnie hooked on drugs, and when an overdose kills the young bandleader, Richie is devastated. His girlfriend Beth is there for him, but for the rest of the band, their grief takes on a violent edge as they begin to connive to avenge Donnie's death.

Jeffrey Martin
as Jeff "The Beast"

There are no critic reviews yet for Thunder Alley. Keep checking Rotten Tomatoes for updates!

There are no featured audience reviews yet. Click the link below to see what others say about Thunder Alley!