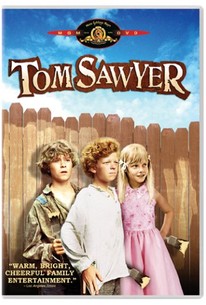 Mark Twain's classic tale is brought to the screen for the fourth time, this time with a tuneful score by Richard M. Sherman and Robert B. Sherman, who also wrote the screen adaptation. Johnny Whitaker stars as Tom Sawyer, with Jeff East in his first film role as Huck Finn. Jodie Foster is also on hand, playing the role of Becky Thatcher. This enjoyable family fare was nominated for three Academy Awards: Best Art Direction, Best Song Score and Best Costume Design.

James A. Kuhn
as Blacksmith

Anne Voss
as Girl
View All

The dramatic interludes with Injun Joe are filmed for maximum impact.

And you have to have a passel of kids around you... to know that there's a children's classic at hand and that you can double your pleasure in adulthood by knowing the generations are ungapped thereby.

Has the sweep of grandeur of a musical in the classic Hollywood style, even if the songs don't always fit comfortably into the narrative.

Matthew Lucas
From the Front Row
View All Critic Reviews (3)

very faithful to the book, although it skipped some parts.