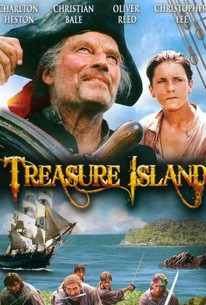 This full-blooded TV adaptation of Robert Louis Stevenson's Treasure Island was written, produced and directed by Frasier Heston. His father, Charlton Heston plays Long John Silver. Eschewing the cuteness of Wallace Beery and the unadulterated ham of Robert Newton, Heston plays the character as written: a cold, crafty, cunning rogue, by turns charming and deadly, but never to be underestimated. The plot adheres with utter fidelity to the Stevenson novel, beginning with innkeeper's son Jim Hawkins (Christian Bale) finding himself in possession of a treasure map from the doomed Captain Billy Bones (Oliver Reed). In the company of Dr. Livesey (Julian Glover) and Squire Trelawny (Richard Johnson), Jim ships out on the Hispaniola, in search of gold doubloons and pieces of eight. Hand-picking the crew for this mission is the ship's one-legged cook Long John Silver, who fully intends to mutiny, kill the treasure hunters, and claim the gold for himself. Featured in the cast are Clive Woods as Captain Smollett, Christopher Lee as Blind Pew, and Nicholas Amer as addled hermit Ben Gunn. Treasure Island premiered January 22, 1990, over the TNT cable network.

There are no critic reviews yet for Treasure Island (Devil's Treasure). Keep checking Rotten Tomatoes for updates!

Lots of familiar faces. Not Terrible. Sticks pretty close to the book. Good production value for a TV movie.