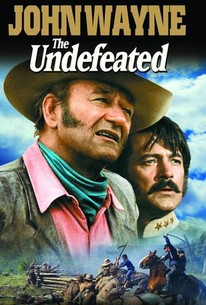 This routine western finds Union Colonel John Henry Thomas (John Wayne) and company attacking Confederate soldiers lead by Colonel James Langdon (Rock Hudson). After a crushing defeat, Langdon torches his plantation rather than have it fall into enemy hands. A group of Southerners accept the invitation of Emperor Maximilian to join them, and Langdon heads off with a wagon train of settlers to a new land. Thomas with his adopted Indian son Blue Boy (Roman Gabriel) bring a herd of 3,000 horses across the Rio Grand for sale. The two factions meet at a Fourth of July party and relive the war through a drunken brawl. When Mexican General Rojas (Tony Aguilar) holds the Southerners hostage, Thomas orders the herd to stampede into the General's camp as ransom payment for their former enemies. Merlin Olsen plays the blacksmith Little George. Both Gabriel and Olsen were pro-football all-stars for the Los Angeles Rams. Olsen continued his acting and sports announcing after his gridiron days were over. ~ Dan Pavlides, Rovi

Critic Reviews for The Undefeated

Unfortunately, McLaglen is never able to draw his threads together. As in his The Way West, he takes a panoramic theme and then gets so close to it that we lose sight of the whole.

The old frontier is alive and well in the Duke's mind and in that of his director, Andrew V. McLaglen.

A large measure of their success is due to an accomplished screenplay by Waldo Salt-pungent, racy, and with a nice line in over the shoulder throwaways.

While the action is decent, the plot is just a little too strained, the dialogue too wooden, and Hudson overmatched in this John Wayne vehicle.

Full of cliches, this tired Western is one of Wayne's weakest films, made in the same year he appeared in the Oscar-winning True Grit.

Theme of reconciliation between North and South is well-realized.

Audience Reviews for The Undefeated

A bit of benign escapism released in the United States at a time when the country was embroiled in divisive anti-war demonstrations and a tumultuous civil rights movement. McLaglen's epic western is entertaining but noticeably conciliatory and rather unimaginative.

An enjoyable Western with a unique premise. If you're seeing it for The Duke, you won't be disappointed, and prepare to be surprised by Rock Hudson.

Not perfect, but it's a really decent and enjoyable movie. You're seeing it for The Duke most likely, therefore you should know exactly what you're getting into. It's a very interesting story about the reconstruction and the spoils of war. There's some nice sequences and it's a very original type of western/war movie that I don't think comes along very often.

Well performed by John Wayne and Rock Hudson in this western aftermath of the Civil War. Featuring an excellent supporting cast and tremendous scenes of sprawling action.