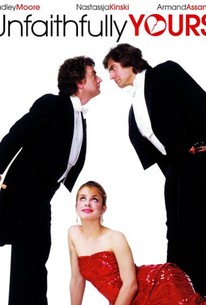 This remake of the 1948 Preston Sturges classic stars Dudley Moore as the symphony conductor who imagines ways to get back at the wife he believes is unfaithful to him. Moore plays Claude Eastman, the conductor of a prestigious sympathy, who suspects that his actress wife Daniella (Nastassja Kinski) is fooling around behind his back with the orchestra's handsome soloist, Maxmillian Stein (Armand Assante). The tip comes courtesy of Norman Robbins (Albert Brooks), Daniella's brother. As Claude is conducting a symphony, an elaborate plot plays out in his head -- he will murder his unfaithful wife to get revenge on her. The plot is simpler and more straightforward than the original version, in which the conductor harbored three separate elaborate fantasies.

Richard B. Shull
as Jess Keller

Daniele Jaimes Worth
as Autograph Seeker

Alexander B. Reed
as Man at Plaza

Betty Shabazz
as Woman at Plaza

Robin Allyn
as Teenager at Plaza

Linda Stayer
as Woman in Mink

Critic Reviews for Unfaithfully Yours

It may lack Sturges' caustic spirit, but the humor is still there... Unfaithfully Yours is destined to be one of the best comedies of the season. [Full Review in Spanish]

...benefits rather substantially from the above-average efforts of its various performers...

The remake of 'Unfaithfully Yours' is just a shadow of its source, using the basic plot and characters, but diluting Sturges's ideas.

A slow trickle of a sex farce; a movie that's not exactly awful, although it is exceedingly dry and consistently desperate.

The end of a great career.

Audience Reviews for Unfaithfully Yours

There are no featured audience reviews yet. Click the link below to see what others say about Unfaithfully Yours!