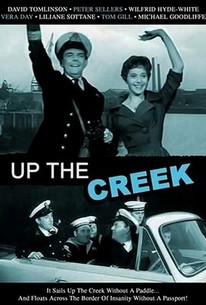 Up the Creek is a mirthsome remake of the classic Will Hay comedy Oh, Mr. Porter (1937). Whereas the Hay film concerned an inept railroad stationmaster, the hero of the remake, Lt. Fairweather David Tomlinson, is an inept naval officer. Transferred to the HMS Berkeley, a decrepit WW2-vintage destroyer where he can do the least amount of damage, Fairweather teams up with his new bosun Peter Sellers for a variety of slightly larcenous money-making schemes. Things come to an uproarious conclusion when the admiralty shows up for an inspection of the Berkeley. Surprisingly, Up the Creek was filmed with full permission of the Royal Navy. ~ Hal Erickson, Rovi

Max B
View All

Critic Reviews for Up the Creek

There are no critic reviews yet for Up the Creek. Keep checking Rotten Tomatoes for updates!

Audience Reviews for Up the Creek

There are no featured audience reviews yet. Click the link below to see what others say about Up the Creek!

Up the Creek Quotes