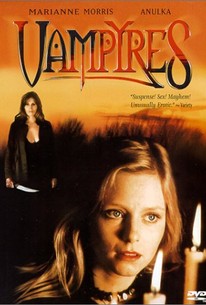 This Hammer-flavored gothic outing (originally titled Daughters of Dracula) involves the sanguinary exploits of two female vampires (Marianne Morris and Playboy centerfold Anulka) who bed down together in a queen-sized coffin by day and seduce male and female victims by moonlight, leading to lots of steamy soft-core sex scenes followed by copious amounts of the red stuff. One of their victims (Murray Brown) falls in love with Moore, even as he grows increasingly anemic due to her nutritional requirements. Moody photography and lush sets enhance the film's fatally hedonistic atmosphere, and the stars assay temptingly feline performances that render their characters' seductive powers chillingly real. This was a late entry in the European "lesbian vampire" sub-genre, a 1970s phenomenon made popular by such filmmakers as Jean Rollin and Jess Franco that made a comeback in the late 1990s. ~ Cavett Binion, Rovi

Karl Lanchbury
as Rupert
View All

Although its moments of violence are few and far between, Larraz has created a much more aggressive and outlandishly gruesome vampire film than most of his contemporaries from the period.

To quote [director Joseph] Larraz himself: "Naked girls and lots of blood, that's what Vampyres is about."

A guilty pleasure if ever there was one.

Vampyres is one of the movies from the early '70s sex-horror female vampire sub-genre. In this respect, Jose Ramon Larraz film is reminiscent of Jean Rollin's work. But while Vampyres contains all the usual staples of Rollin's films ? ultra low budget and average at best acting, lyrical imagery and sensuality, interesting female leads and negligible male supporting cast ? it differs in that it contains much more bloody violence. And this is no bad thing. The story is very straightforward. Two female vampires lure unsuspecting men back to their remote mansion, where the unfortunate chaps meet with a bloody climax (no pun intended). While the dialogue and acting is, at times, shaky, the movie does conjure up some effective sequences. The photography captures the contrasting imagery. From the haunting scenes of the vampires running through the countryside to the visceral violence when they kill. The sex and violence is inter-linked. The vampires cannot have one without the other. And this results in unforgettable images of the vampires sucking the blood out of a comatose man's arm then sharing it via French kisses! Nice little touches like the fact that the vampires sleep with their eyes open are used to good sinister effect too. Overall Vampyres is a good example of this type of film. Don't expect too much from plot and acting but if you like left-field exploitation movies with a little bit of style then give this a whirl.