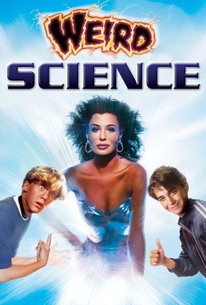 Critics Consensus: Hardly in the same league as John Hughes' other teen movies, the resolutely goofy Weird Science nonetheless gets some laughs via its ridiculous premise and enjoyable performances.

Critics Consensus: Hardly in the same league as John Hughes' other teen movies, the resolutely goofy Weird Science nonetheless gets some laughs via its ridiculous premise and enjoyable performances.

Critic Consensus: Hardly in the same league as John Hughes' other teen movies, the resolutely goofy Weird Science nonetheless gets some laughs via its ridiculous premise and enjoyable performances.

John Hughes's third directorial effort, Weird Science, follows in the tradition of his previous teen-centered films, Sixteen Candles and The Breakfast Club. Anthony Michael Hall and Ilan Mitchell-Smith play the wannabe hipster Gary and his nebbish weak-willed best friend, Wyatt, a pair of high-school geeks who are hapless with members of the opposite sex. Using Wyatt's computer, they create what they believe is the ideal woman. A lightning storm brings that woman to life, and she takes the form of Kelly Le Brock. Lisa sets about building their self-confidence, but trouble begins brewing when Wyatt's cruel, military-minded older brother, Chet (Bill Paxton), begins to realize that something is not as it should be. Hughes would finish his cycle of high-school themed films with his next movie, Ferris Bueller's Day Off. ~ Perry Seibert, Rovi

Wallace Langham
as The Weeny

Johnny Timko
as The Weeny

Mikul Robins
as The Weeny

Darren Harris
as The Weeny

Babette Props
as The Weeny

Michael Cramer
as The Weeny

Todd Hoffman
as The Weeny

Mary Steelsmith
as Girls in Bathroom

Robin Frohman
as Girls in Bathroom

Prince A. Hughes
as Party Guest

Steve James
as Guy at Table
View All

Weird Science veers off into a typical coming-of-age saga without exploring any of the psychological territory it lightly sails over in the early going.

A mildly dirty reworking of love, popularity and wild times, this is John Hughes' scrappiest film to date, but it redeems its tastelessness and stupidity by being fairly funny most of the time.

This is ordinary stuff that's aged about as well as Mitchell-Smith's clunky computer.

Even 14-year-old boys may find it heavy sledding.

...Hughes drills down on a simple, relatable theme; make the best of what you have while you have it....

Outlandishly silly and a whole lot of fun.

Weird Science is certainly an 80's curiosity for anyone who is a fan of John Hughes, but it is definitely more of a questionable relic of that era than his other works.

A more than valid sample of the incredible eclecticism that characterized those wonderful eighties. [Full Review in Spanish]

Think of Weird Science as a Vanilla Sky for John Hughes. It's anomalous to his usual genre but analogous to the trials and tribulations found in his other work.

Weird Science is pretty much as perfect a 1980s teen comedy as has ever existed.

Remember those awkward teenage years? Well if you don't here's a work that'll fully immerse you in all those forgotten feelings of being out-of-place. Penned and directed by John Hughes it's a cross between Bewitched and Frankenstein wherein two youths fabricate their dream woman on a computer and she comes to life, complete with a full set of do anything powers. It's really bad/sad, the stretches Hughes makes, all in the name of wish fulfillment for 12 to 14 years olds boys. You will feel awkward again ... just watching it.

"Weird Science" is as dumb as it's title suggests, but in the best way possible. John Hughes, before making the classic films that he did, strted off with this film, and to me, it hit much more than it missed. As two unpopluar high school boys decide to build the perfect girlfriend out of a computer, all hell will eventually break loose. I thought this film was extremely fun for what it was, but the script was pretty lame at times. However, for that reason alone, I actually lied the movie even more. I will never call this a great film, but I did really like it. It's humour is juvenile, it's plot is just the same, and the performances by the kids are hilarious to watch. In the end, I found myself laughing really hard, so in my eyes that warrants a big recommendation.

Another one from my past. Love this! Even though they are essentially sleazy little boys, it is quaint compared to today's movies. (Wow, I sound 100). John Hughes really did have a way with teen movies. One of my favourite roles for Anthony Michael Hall, too. I guess it's pretty silly, two geeky boys "create" a woman on their computer who comes to life (as you would expect...), but it's amusing and the boys are likeable.