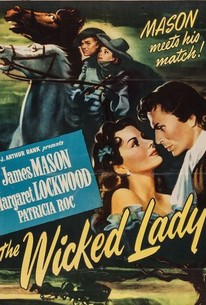 In this drama, set during the reign of King Charles II, the aristocratic Lady Skelton (Margaret Lockwood) attempts to relieve the tedium of her day-to-day life by secretly acting as a highway robber. Meeting up with the rogue Captain Jerry Jackson (James Mason), the two begin a relationship. When her private and public lives begin to interfere with one another, however, Lady Skelton finds herself caught up in a tangled web of romance, danger, and jealousy.

David Horne
as Martin Worth

Aubrey Mallalieu
as Doctor
View All

Critic Reviews for The Wicked Lady

Amid the romantic highwaymen, secret passages and poisoned elderberry wine, the bogus sentiments expressed by the actors are a perfect match for the bogus look of their hair pieces.

Producers claim that this story is 'set in the days of Charles II'. Sets, costumes and a comely bunch of femmes bear out the claim. But the period atmosphere is not convincing.

Former critic and screenwriter Arliss [is] the unfortunate director having to contend with the recalcitrant mechanics of Lime Grove studio ruralism.

The film is enveloped in realism and visual frankness. [Full Review in Spanish]

Filled with silly twists and overwrought melodrama, it has a distinctive sensibility, two charismatic anti-heroes who invest their roles with personality and energy, and a stylized, unreal flamboyance that keeps them lively.

This lushly costumed drama is surprisingly boring, but Mason stands out with his swagger and gusto while the rest of the cast members are sadly unconvincing.

With excellent photography from Jack Cox, lavish costuming and rich settings, this becomes a novelette on high-quality art paper. Nobody, surely, is expected to believe in its naive manner of narrative.

A silly but nonetheless entertaining film with a devilish lead and some fine 'stand and deliver' action.

Audience Reviews for The Wicked Lady

The title of this melodramatic tale of a noblewoman turned highwayman says it all...it sounds like a Mills & Boon novel, and plays like one too. James Mason is rather good as her rakish lover though.