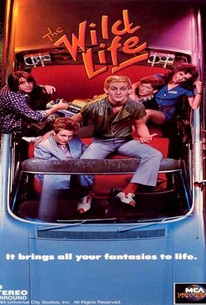 Comprised of classic teen movie elements scattered like croutons over a salad, this undistinguished high school drama involves several inconsequential stories at once, set in a seven-day period before the beginning of school. Tom Drake (Christopher Penn, Sean's brother) is a high-school wrestler who loves Eileen (Jenny Wright), but she is more than just a little dubious about their relationship. Since her lecherous boss (Rick Moranis) will not leave her alone, men are at a low ebb in her life. Bill Conrad (Eric Stoltz) is a friend of Tom's who has already graduated and who asks him to share his apartment for awhile to help him out financially. Bill then decides to split with his girlfriend Anita (Lea Thompson), who is suddenly too young for his new status as a high-school grad. Miffed at his rejection, Anita starts a liaison with David Curtiss (Hart Bochner), without knowing that David is married and a father. Other than Bill's 15-year-old brother Jim (Ilan Mitchell-Smith), who follows a Vietnam vet around in adulation, the entire focus of the film is on teen love relationships played by twentysomethings from the vantage point of tensomethings, more or less.

Kim Vignal
as Girl by the Pool

Ed Call
as Captain of the Plumbing Team

Ed Berke
as Man Next Door

Jessica Rains
as Woman Next Door

Jeff Savenick
as Guy in Bed

Sue Bowser
as Girl at Party

Inga Ojala
as Girl at Counter

Edward Call
as Captain of the Plumbing Team

Critic Reviews for The Wild Life

Practically every character is unremittingly dull, while Chris Penn's bad-boy party animal is insufferable from first frame to last.

Audience Reviews for The Wild Life

An average teen drama like Fast Times at Ridgemont High and other like it. The cast is good, and the characters are interesting, but the story is all over the place. This movie could have been better.