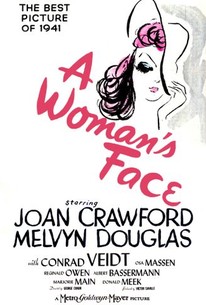 A remake of the Swedish film of the same name (see entry 55092), MGM's A Woman's Face was reshaped into one of Joan Crawford's best vehicles. Told in flashback from the vantage point of a murder trial, the story concerns a female criminal whose face is disfigured by a hideous scar. The plastic-surgery removal of this disfigurement has profound repercussions, both positive and tragically negative. The film's multitude of subplots converge when Conrad Veidt, Joan's lover and onetime partner in crime, is murdered. Melvyn Douglas costars as the beneficent cosmetic surgeon who becomes Joan's lover, while Osa Massen appears as Douglas' vituperative wife. Making his American screen debut in the role of Veidt's father is Albert Basserman, who spoke no English and had to learn his lines phonetically. Both A Woman's Face and its Swedish predecessor were based on Il Etait Une Fois, a play by Francis de Croiset.

Critic Reviews for A Woman's Face

It is one of the most intensely dramatic stories in the cinema. [Full review in Spanish]

A Woman's Face remains a delightful dollop of dark chocolate for Cukor fans.

Joan Crawford, disfigured for her (and George Cukor's) art

Under Cukor's guidance, Crawford gives one of her least mannered performance in this noir remake of an Ingrid Bergman Swedish film about a woman whose scarred face has made her bitter.

Pleasing film despite the inane dialogue.

Audience Reviews for A Woman's Face

Right after directing "The Philadelphia Story," George Cukor made the unfairly forgotten melodrama "A Woman's Face," starring Joan Crawford and a great supporting cast that included Melvyn Douglas and a demonic Conrad Veidt. It's certainly not a great film. But like the vast majority of 1940s melodramas, it's been weirdly forgotten. The first thing that hit me when it started was the unbelievably cheap sets. I don't know how Cukor tolerated cardboard sets. But I put that out of my mind and focused on the story, which was actually quite interesting. A woman (Crawford) has a disfigured face resulting from a house fire that occurred when she was a child. The social and erotic ostracism she experienced because of the disfigurement has turned her soul black. She is just one step away from becoming a serial killer. She meets her demonic equal (Veidt), and they team up to kill a five-year-old boy who stands in the way of Veidt inheriting a fortune. I kid you not; this story gets quite dark. There are other dimensions to the story that add some nice richness. If not for the cheap sets and rancid B-movie music, "A Woman's Face" could have been a major film. The sequence where Crawford is on the verge of killing the child is unforgettable. Oh, and did I say the film is set in Sweden? Sweden, of all places. But all the dialogue is in English. Odd little movie. (Just FYI -- Cukor doesn't have much name recognition these days, but he directed many famous movies, including 'My Fair Lady,' 'Adam's Rib,' 'Born Yesterday,' and the Judy Garland version of 'A Star is Born.')

dark material for cukor, better known for his comedies. he manages to draw a nicely restrained performance from joan crawford, as a woman whose fate is twisted by her disfigured face. and no one does evil like conrad veidt. i'd love to see the original swedish film with ingrid bergman but it must be nearly impossible to find. only one flixster rating!

Sometimes I actually prefer A Woman's Face over Mildred Pierce - Cukor seems to have subdued Crawford a little, making her seem less histrionic - softer and less brittle. But I suppose that's why it's less popular - we want the brittle glamour and we love to see Joanie "suffering in furs". In 'Mildred Pierce' we don't quite believe her as a frumpy house-wife, wearing a pinnie, baking pies so as soon as she dons the shoulder-pads and starts bashing Vida about, we cheer! But Anna Holm is a great character too and just as exciting to me. Scarred physically as well as mentally, Anna takes her misfortunes out on the silly 'beautiful' women of the film with blackmail. It's not long before she is falling for the insidious charms of Conrad Veidt and is seduced into the worst of all crimes - the murder of a child. This poses a troubling flaw in her character (probably not intentional). You don't know till the end of the flic whether she carries out her heinous act or not (this being Hollywood you have a fair idea though!) but the fact that she, at least, considers it seriously is infinitely harder to forgive than her blackmail endeavours. It does add to your interest in Anna though - but at the same time you sympathize with her less. It's still a marvelous film and Crawford is great. Veidt, as usual, is wonderfully malevolent as the villain of the piece and their scenes together are eery and spellbinding (despite some dodgy dialogue) . Many of the minor characters do a fine job too - I particularly liked Albert Bassermann's crusty old Consul and Ossa Massen is a delight as one of Crawford's 'silly' victims (Crawford gets to give her a good slapping). Melvyn Douglas, on the other hand, is only adequate. To me he seems to be in the wrong movie - his screwball and matinée idol pedigree doesn't ring true in such a dark and gothic tale. It's surprisingly cinematic for a Cukor pic (As great as I think his films are, I do find them a little flat visually) - looking very noirish and gothic - especially the way Crawford is lighted. And it has a very exciting chase in the snow for a finale. It has it's faults but they are few and minor. I defy you not to enjoy it!