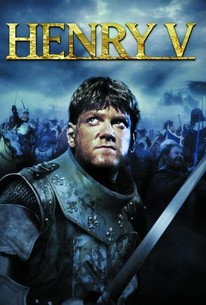 Simon Shepherd
as Duke of Gloucester

Paul Gregory
as Earl of Westmoreland

Charles Kay
as Archbishop of Canterbury

Alec McCowen
as Bishop of Ely

Richard Innocent
as Duke of Burgundy

Richard Clifford
as Duke of Orleans

Richard Easton
as Constable of France

Nigel Greaves
as Duke of Berri

Branagh has made a hotblooded, lively and moving Henry V that speaks pertinently to a new generation.

There is a great deal of value in Branagh`s version, not least in his own lead performance as a soft, indefinite Henry who defines himself over the course of the play.

If Olivier gave us the glint of sunlight on armor and the wind roaring through the pennants and flags, Branagh gives us the rot, the mold, the wounds and the crusted blood underneath.

There's a boldness to Branagh's Henry V, which shows off the cinematic possibilities of Shakespeare without a lot of distracting razzle-dazzle.

A stirring, gritty and enjoyable pic which offers a plethora of fine performances from some of the U.K.'s brightest talents.

It might never be as famous as Olivier's, but it should carry considerable clout for years to come.

Reigniting Shakespeare's poetry on screen, the movie is not only accessible to a general audience -- it has enough excitement, wit and suspense to hold its own in the Hollywood fray.

This is a solidly mounted production, with the contrasts between the finery of the court and the grime of the battlefield as striking as the excellent cast of noted thespians.

Aside from the confusing scenes with Falstaff, it all works very well and is very impressive considering it is Branagh's directorial debut.

[VIDEO ESSAY] Toward "turning many years into an hourglass," Branagh the screenwriter condenses "King Henry the Fifth," while adding in elements from the first and second parts of "King Henry the Fourth." The effect is seamless.

Like Sir Larry's, this remains Branagh's best movie and although less spirited and more actorish than its predecessor, it has a modern feel and a grittier tone to it, notably in the battle scenes.

The Branaugh take on Shakespeare starts here with the film that had everyone comparing him to Larry Olivier. It is possible that we embraced this first very good Shakespearean film since Olivier a little easily. Branaugh is no Olivier after all and this film is not as good as Larry's in '44.

Good. But too much left out.

Kenneth Branagh's adaptation of Shakespeare's play was his directorial debut and at the time many balked at the very idea that this young whipper snapper could dare to get in the ring with Laurence Olivier and his then definitive version. This film is a completely different proposition however, choosing to use the cinematic medium to great effect to breathe gritty, believable life into the characters and story. He is of course backed up by probably the finest assemblance of Shakespearian talent whose pedigree shines through in a faultless collection of performances, from the arrogance and politicking of the nobles to the earthy pathos of the common soldier. Even the uninitiated who can be intimidated by the seemingly inpenetrable prose should be able to follow the plot because of the clever use of performance and realism to convey the meaning of the florid dialogue, but I must admit from time to time I wished I had some Cliff notes to aid my understanding of the nuances. The battle scenes are recreated in a way obviously influenced by John Boorman's Excalibur, all sweat and blood and filth, and to echo the modern climate offers a more human portrayal of bloodshed on such an epic scale. The highlights are of course all provided by Branagh's excellent and naturalistic interpretation of Henry (although Paul Scofield's subtle performance as the melancholy King of France is near its equal), most notably his pre-battle speeches which inspire without the clodhopping patriotic manipulation you have seen in everything from Braveheart to Independence Day. His inexperience behind the camera tells occasionally as he gets a little slo-mo happy and the battle is a little confusing, but as a whole it's a great achievement.

No one on the contemporary movie scene -- or ever on the screen -- does Shakespeare better than Branagh. As both actor and director, he is simply the best. He can manage all his actors in such a way that you will understand the plays clearly, both in terms of dialog delivery and action. I don't know if this is the best job he's done, but it's at least tied for number one. If you only see one Branagh Shakespeare, make it this one.

Note: If you are confused by some of the references to Henry's "former" self and his former friends, you may want to check out Henry IV parts I and II. Unfortunately those won't be Branagh projects -- at least not yet. Here's hoping he does those as well.