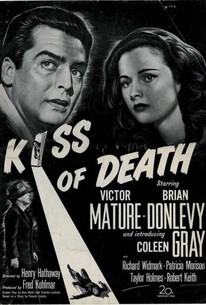 Based in part on a true story, Kiss of Death is given a veneer of reality by being filmed on location in New York, per the insistence of director Henry Hathaway..Victor Mature plays Nick Bianco, a cheap crook who commits a Christmastime jewelry store heist with his gang, and manages to get the rap while the others slip by the police unnoticed. Nick refuses to testify on the others, and gets sent up the river for 20 years for robbery. Before he goes to prison, he's assured by the criminal element that his wife and children will be taken care of while he's behind bars (thanks in no small part to his refusal to testify), but this is a blatant lie: during his incarceration, he learns that the family has gone broke, his wife committed suicide and his children have been sent to an orphanage. Furious, Nick summons district attorney Louie d'Angelo (Brian Donlevy) and makes an unusual deal: parole, in exchange for his willingness to squeal on the others. Louie expresses particularly strong interest in nabbing sadistic mob torpedo Tommy Udo (Richard Widmark, in his chilling screen debut), and helps secure Nick's release with the understanding that Nick will ingratiate himself with Tommy. This he does, spending inordinate amounts of time with the psychopath and earning the man's trust. Meanwhile, Nick also falls in love with Nettie (Colleen Gray), marries her, and regains custody of his two young daughters. The family moves to a small house together (with Nick living under an assumed name), but Louie realizes that his cover will soon be blown. To make matters even more complicated, Louie soon comes calling and pressures Nick into testifying against Tommy. Nick hesitates, given his concern that Tommy will come after him as soon as police surveillance lifts. Moreover, Tommy has a few nasty tricks of his own, however, and vows to make life as difficult as possible for Nick. This is the film in which Widmark's character gigglingly pushes a wheelchair-bound old lady down a flight of stairs. Reviewer James Agee said it best: "You feel that murder is the kindest thing he is capable of". The film made Widmark a star--and also convinced him to start lobbying immediately for good-guy roles so that he wouldn't be typecast as maniacal killers for life. Kiss of Death was remade as the 1958 western The Fiend Who Walked the West, then re-remade under its original title in 1994, with David Caruso in the Mature role and Nicolas Cage in the Widmark part, and the violence and nudity dramatically elevated to conform with the times.

Howard I. Smith
as Warden

Dort Clark
as Man in Car

Tito Vuolo
as Luigi
View All

It is ... something new and welcome in U.S. crime movies. None of its criminals is glamorous, nor does anyone piously point out that crime does not pay. Nobody has to. The whole picture amply demonstrates the fact.

The film is efficient enough, but it's a measure of Hathaway's limitations that it never once fulfills the paranoid delirium built into its subject.

A jumbled piece of cinematic crime fiction that's visually elegant but regularly confused about its own point of view.

Seeing a fated protagonist continually dig himself into a deeper and deeper mess is nothing new, but Bianco's gentle-giant temperament evokes admiration and pity.

But despite being a bit rough around the edges, Kiss of Death still satisfies.

What really sets this noir apart...is a combination of Hathaway's deliberate craftsmanship and the small crackerjack ensemble led by Mature and Widmark

If the production code didn't mandate the villain's defeat by the film's end, Udo would have walked away triumphant, tossing a butt at a flat-on-his-face Bianco.

Hathaway's film noir is largely known for Richard Widmark's debut in an Oscar-nominated role of a giggling psycho who pushes old crippled ladies down the stairs.

Audience Reviews for Kiss of Death

An all-star cast with a heart-felt story, but it could have done a better job at presenting the story or something, I just felt it could have been better in some way. Still, I think this is a good movie, and very worth seeing.

This is billed as a film noir, but it plays more as a crime drama. Victor Mature plays Nick Bianco, a robber who agrees to "snitch" on his cohorts in a heist in order to see his young daughters. It's a decent suspense film, but it is most memorable not for the main story but rather for the character of Johnny Udo, a giggling psycho played by Richard Widmark in his first role. What Johnny does to the old lady in the wheelchair is now the stuff of film legend. Widmark steals every scene he's in, which admittedly isn't hard since Victor Mature isn't much of an actor and I found Colleen Gray to be kind of a dull presense. But the film is still a damn sight better than a lot of others I could name.

Noir to the core. A spattering of memorable moments, not the least of which is the psychotic hit-man [Richard Widmark] sending an old woman flying down a flight of stairs in her wheelchair. (Ouch!)

Widmark is hysterically great and there's some nice cinematography and NY locations - unfortunately the pacing is glacial, the point of view is uncertain and Victor Mature...well he's really dull. To be fair, this type of docu-noir probably packed a lot more kick in the years before TV took the judicial procedural as its meat and potatoes.