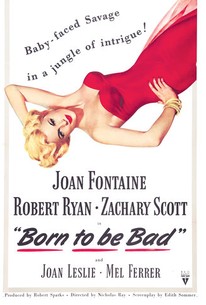 One of the most oft-revived of the pre-Technicolor Nicholas Ray efforts, Born to Be Bad offers us the spectacle of Joan Fontaine portraying a character described as "a cross between Lucrezia Borgia and Peg O' My Heart". For the benefit of her wealthy husband Zachary Scott and his family, Fontaine adopts a facade of wide-eyed sweetness. Bored with her hubby, she inaugurates a romance with novelist Robert Ryan. All her carefully crafted calculations come acropper when both men discover that she's a bitch among bitches. She might have gotten away with all her machinations, but the censors said uh-uh. Originally slated for filming in 1946, with Henry Fonda scheduled to play the Robert Ryan part, Born to Bad was cancelled, then resurfaced as Bed as Roses in 1948, this time with Barbara Bel Geddes in the Fontaine role. RKO head Howard Hughes' decision to replace Bel Geddes with the more bankable Fontaine was one of the reasons that producer Dore Schary left RKO in favor of MGM. Based on Anne Parrish's novel All Kneeling, Born to be Bad is so overheated at times that it threatens to lapse into self-parody; though this never happens, the film was the basis for one of TV star Carol Burnett's funniest and most devastating movie takeoffs, Raised to be Rotten.

Donald Dillaway
as Photographer
View All

Critic Reviews for Born to Be Bad

This is a lively, vicious, and daring film.

Lively romantic melodrama with a creative use of architecture.

Ray's interest in the psychological state of his protagonist and its relationship to visual style makes the film mesmerizing.

Audience Reviews for Born to Be Bad

Joan is in her viper mode here and the film is enjoyable but the ending is a letdown.

Born to Be Bad Quotes