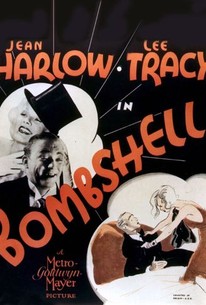 Jean Harlow is the "bombshell" of the title, a popular movie actress named Lola. Though she seemingly has everything a girl could possibly want, Lola is fed up with her sponging relatives, her "work til you drop" studio, and the nonsensical publicity campaigns conducted by press agent Lee Tracy. She tries to escape Hollywood by marrying a titled foreign nobleman, but Tracy has the poor guy arrested as an illegal alien. Finally Lola finds what she thinks is perfect love in the arms of aristocratic Franchot Tone, but she renounces Tone when his snooty father C. Aubrey Smith looks down his nose at Lola and her profession. Upon discovering that Tone and his entire family were actors hired by Tracy, Lola goes ballistic--until she realizes that Tracy, for all his bluff and chicanery, is the man who truly loves her. Allegedly based on the career of Clara Bow (who, like Lola, had a parasitic family and a duplicitous private secretary), Bombshell is a prime example of Jean Harlow at her comic best. So as not to mislead audiences into thinking this was a war picture, MGM retitled the film Blonde Bombshell for its initial run.

One of the funniest pictures of the year.

Surprising for something so mean-spirited to have come so early in the Dream Factory's saga of self-loathing, and even more surprising because it seems so heartfelt.

Harlow gives a star quality comedy turn that's spoiled only by too much speechifying on her part.

Dated, but Harlow is in her prime.

It's all funny and on-target, but most of the satire is -- as you might expect -- not too unkind.

It's nice to see Jean Harlow in a major role after her breakout performances in 1932, but this film is saddled with a weak script, and filled with noisy and annoying performances. Harlow plays a Hollywood starlet and is awfully shrill in the first half of the film, but the biggest problem is Lee Tracy, who plays a slick studio publicity agent. His actions in keeping Harlow in line, his voice, and his smugness all made me want to reach back in time 83 years and punch him in the face, and yet he is positioned as the 'good guy'. Ugh! The attempts at comedy are dated, but Tracy manipulating it so Harlow can't adopt a child because he believes she couldn't do that and have a career is just sickening, not clever. There are some in-jokes in the film, the best of which is 'Harlow playing Harlow' and the barrel scene from 'Red Dust'. It's nice to see Frank Morgan, better known as being the Wizard of Oz, and it's always nice to see Harlow, and here she tells off the leeches in her life in a nice scene, coos over a baby, and later rides a horse. However, it's pretty bad when your favorite part of the movie is the three sheepdogs! This one is overrated and disappointing.

A comedic look that was supposedly inspired by the true life of not only Clara Bow, but Jean Harlow herself. Whether the joke was on her, or she knew it; she seemed to have a lot of fun doing it. In fact, all the actors seemed to have a lot of fun doing this film. This was the best that I've ever seen Harlow. She played a movie star with family who she supported, while they drank and had fun; along with others that used her for their own gains. This poor woman couldn't catch a break. Crazy fun.

it's a very pointed satire of the offscreen life of a sex symbol, ostensibly based on the 'it' girl, clara bow, but having much in common with harlow's own life. great dialogue and one of her best films

"Bombshell" is a breezy, very funny and unpredictable romp about Lola Burns(Jean Harlow), a popular movie star whose famous image clashes with her chaotic personal life, starting with her neer-do-well father(Frank Morgan) and her latest flame, Hugo(Ivan Lebedeff), supposedly a marquis. And that's where Space Hanlon(Lee Tracy), who handles publicity for Monarch Pictures, comes in, as he tries to maintain Lola's image for her devoted public. Of course, how he goes about that might seem a little underhanded as he tries to get Hugo deported. But he means well, not wanting her to make any mistakes that could wreck her career where she makes five movies a year. What's most surprising about "Bombshell" is how far ahead of its time it is in the department of metafiction. See, the movie that Lola is working on is called "Red Dust" with Clark Gable and there are some reshoots that have to be made under the direction of James Brogan(Pat O'Brien). It's the barrel scene, if you must know.