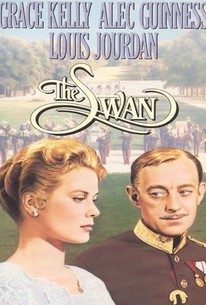 Frances Howard starred as Princess Alexandria in the 1925 silent version of Ferenc Molnar's play The Swan; Lillian Gish assumed the role in the 1930 talkie version. The third and final adaptation starred Grace Kelly, who had one slight advantage over her predecessors; she would soon become a real princess instead of a make-believe one. And don't think that MGM, knowing full well that Grace would retire from moviemaking upon ascending the throne of Monaco, didn't carefully select the timeworn Molnar play for the express purpose of extra publicity. Outside of its mercenary considerations, The Swan is an enjoyable bittersweet tale of a princess who falls in love with her handsome tutor (Louis Jourdan), only to be required to give him up in favor of an arranged marriage of state. The nicest element of the story is that the prince to whom Kelly is engaged, as played by Alec Guinness, is a decent sort, who voluntarily asks for the princess' hand instead of forcing the issue. Of course, the issue has been forced upon him when he realizes the depth of the love Kelly harbors for her tutor. It may well be that this version of The Swan will be the last; on the other hand, who'd a' thunk that someone would want to make Sabrina again in 1995?

Critic Reviews for The Swan

There are no critic reviews yet for The Swan. Keep checking Rotten Tomatoes for updates!

Audience Reviews for The Swan

This is sort of a predictable romance movie with a classical touch. Kelly plays royalty, which she became in real life too, and she's perfect. The movie has some funny scenes, but it's also kind of boring sometimes. Overall it's pretty good.