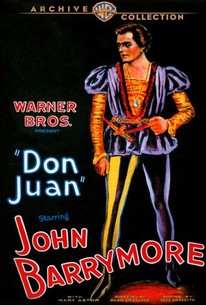 Historically important as the first film to carry a Vitaphone sound track (consisting of music and sound effects, but no dialogue) Don Juan is a first-rate production by any standards, and would have been just as good with or without musical accompaniment. John Barrymore plays the legendary lover Don Juan, raised by his cynical father (also played by Barrymore) to "love 'em and leave 'em", and to never trust any woman. All of this changes when he meets the beautiful Adriana Della Varnese (Mary Astor). When it seems that Adriana has betrayed him in favor of a wealthy marriage to the lecherous Count Donati (Montague Love), Don Juan renounces her and returns to his rakish ways. What he doesn't know is that Adriana is a political pawn, who has been forced into an alliance with Donati by the calculating Borgias (Estelle Taylor and Noah Beery Sr.). By the time Don Juan finds out that his true love is still true, he has been tossed in prison for killing Donati in a spectacular duel. He breaks out, rescues Adriana from the Borgias' torture chamber, and escapes with his beloved to the safety of Spain. The plot is, of course, more complicated than that, but so fascinating is John Barrymore's performance that it's difficult to concentrate on anything else. The film's highlights include the out-sized duel between Barrymore and Montagu Love, capped by Barrymore's spectacular leap from the top of a huge staircase, and the torture chamber sequences, wherein Barrymore sneaks past the Borgia guards by assuming the facial characteristics of fiendish torturer Gustav von Seyfertitz--and this without makeup. "In the know" film historians may read a lot more into the Barrymore/Mary Astor love scenes than is readily apparent, forearmed as they are with the knowledge that John and Mary had once been passionate lovers offscreen. Scenarist Bess Meredyth used the Lord Byron poem Don Juan as a mere stepping stone for this imaginative, exquisitely filmed romantic adventure.

Gibson Gowland
as Gentlemen of Rome

Sheldon Lewis
as Gentlemen of Rome

Dick Sutherland
as Gentleman of Rome

Emily Fitzroy
as The Dowager

Much of this merit is traceable to good direction by Alan Crosland, and to the efforts of a generally good cast.

The first in which music and sound effects were integrated into the film action.

Excellent silent actioner with synchronized score and the great Barrymore.

The movies have gone a long way in portraying Iechers. Barrymore is a plain old lecherous lecher. Today we have Jack Lemmon -- a lecher with the face of a Boy Scout.

There are no featured audience reviews yet. Click the link below to see what others say about Don Juan!