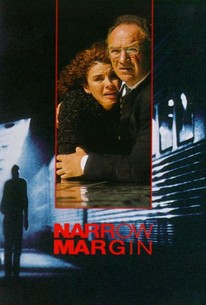 Narrow Margin, directed by Peter Hyams and loosely based on the classic film noir of the same title, tells the story of a resourceful District Attorney who must return a witness to San Francisco alive so she can testify in a trial. Carol (Anne Archer) is in the bathroom of the hotel room of her blind date when he is murdered by mobsters for stealing money. Knowing she is the only witness, Carol flees to an isolated Canadian mountain home to hide out. She is followed by Caulfield (Gene Hackman) who knows that she is a witness and wants to make her testify. When the mobsters track Caulfield to the cabin, Carol must join him in a run for her life on a Canadian train. This film, while it is somewhat uneven, is a tour de force for director/writer/cinematographer Peter Hyams, who delivers a fast-paced, action-packed chase through the Canadian mountains, stunningly photographed and well acted by both Hackman and Archer.

James B. Sikking
as Nelson

Dana Still
as Bellman with Message

A gem of a thriller.

The Idiot Plot, of course, is any plot that would be resolved in five minutes if everyone in the story were not an idiot. And rarely has there been a film in which more idiots make more mistakes than in this one.

The editing leaves something to be desired, considering that gaps in time are presented with slow fade-outs, as if this were made for television.

This remake is a terrific suspense-thriller in its own right. Ranks with other underrated Peter Hyams films such as Capricorn One, Outland and The Star Chamber as one his best.

One of the most underrated suspense thrillers of the 90's

What an incredible gripping tale of the limits a man will go to protect a witness to the prosecution of a murder case. This is one edge of your seat thriller that gently lets go of your emotions at the very end.

Nowhere near as good as the original.

A 50s film noir is remade into a by the numbers thriller. Not terrible, but there's nothing here we haven't seen a hundred times before.

A fine thriller in a train with Gene Hackman and Anne Archer have to play cat-and-mouse with the thugs who've boarded it to eliminate them.